Home / tv and radio shows / Being Gay With Priscilla! By "Joy Isi Bewaji "

Being Gay With Priscilla! By "Joy Isi Bewaji " 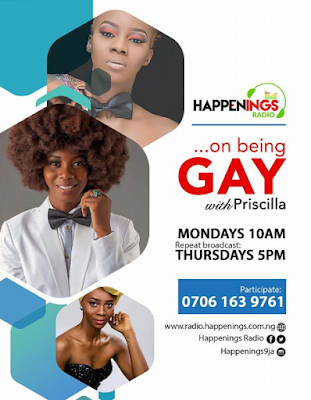 I first think to create - the task to invent is exciting, because I am an artist. Then I think of the commercial value, for the sake of running a business.

So this made sense to me when I first thought about it. And to have someone walk into my office and say, "I'll do this" was very humbling.

In a short time we had planned 13 episodes on paper. We disagreed passionately as would be expected when a heterosexual female wears the producer/sponsor hat of a homosexual female "Gay reality show".

I have the platform. She has her life story.

Everything was set. Pilot shot. Show to start next week.

Then I remembered that little thing called Legal Advice. I called a lawyer.

Bottom line, I cannot hold this show. I am not supposed to even know or be acquainted with gays.

It's quite laughable, you know? This society. I cannot pretend I know the story of homsexuals. Even when the pilot was done, I told the presenter that she was too defensive and was heterosexual hating... but that is quite covenient for me, isn't it? I don't know her struggles. This is not my reality, I don't know how it feels to not be able to express myself.

I am here on social media expressing myself in full regalia. If I like a (Yoruba) man, it is easy to make something beautiful out of desire and attraction. Because my own sexual orientation is approved by society.

I had to make that tough call to cancel the show to a young woman who was looking forward to starting a conversation on (her) acceptance.

"I am sorry you cannot find expression in a country you call home."