Home / local / Buhari Ought To Realise How People Actually Prefer His Deputy To Himself.

Buhari Ought To Realise How People Actually Prefer His Deputy To Himself.

I think by now, Buhari ought to realise how people actually prefer his Deputy to himself. 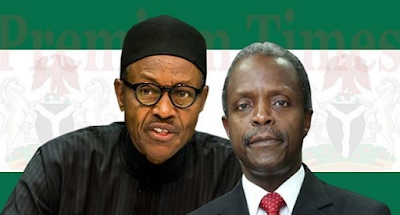 It matters not how you twist it.

Even identical twins who are members of the same team will not have the same approach towards the same issue.

Part of it is just perception based on precedent I admit, but a good chunk of it is approach.

It doesnt matter that PMB instructed Osinbajo to go to the Niger Delta. I am sure PMB did not write the speeches Osinbajo was to deliver. Neither did PMB instruct PYO on the appropriate moments to smile or gesticulate.

Another moot point is the henchmen surrounding the duo.

While Osinbajo, a well lettered man, makes pronouncements that leave little room for ambiguity, PMB's gaffes are further compounded by the insults his numerous ineffective media aides use to obfuscate even the simplest issues.

We all know how the first job Femi Adeshina assigned himself, was to christen those who lost the elections WAILING WAILERS. We all know Garba Shehu's numerous spats as well. Lauretta Onochie, a late entrant, is also not left out.

No matter how much Buhari supporters twist their knickers over this, the fresh approach is there for all to see. A reality that is increaingly being acknowledged by Local as well as International Journals.

I sincerely hope the President becomes aware of this reality when he comes back. It may save whatever is left of his goodwill.