Federer, The Ballerina: Don't Go Yet 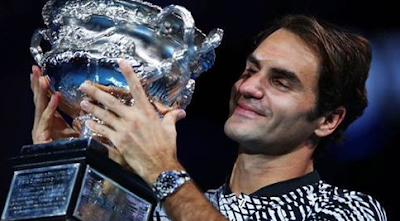 The debate over who is worthy to be crowned Tennis' G.O.A.T (Greatest Of All Time) is over. The Ballerina on Courts, Roger Federer, has snapped it up. Many nicknamed him, The Fed Express for his speed and flawless delivery. But I call him The Ballerina for his flowing seemingly effortless artistry. He is like the violin in classical music. He makes the tough, grinding sport of tennis look easy like Sunday morning as Lionel Richie rhymed.

Let's look at the stats. The Ballerina, now 35 years old, is the oldest ever to win a grand slam. That is the Australian Open, just yesterday.

He trounced four top 10 seeds on his way to claiming the AussieOpen title. Tomas Berdych (3rd round), Kei Nishikori (4th round), Stan Wawrinka (semis) and Rafa (final). "It is a feat not done at a major in 35 years" crowed a tennis enthusiast.

The Australian title is The Ballerina's 18th slam win against 14 each for the closest to this his record: Rafael Nadal and Pete Sampras. Although Rafa is younger than Federer at 30, it is doubtful he will win four more titles before he is 35. Even if he does, The Ballerina has set too many other records for Rafa to smash.

He had not won a Slam since his Wimbledon trophy in 2012 but the gleaming Aussie cup now lies in his glittering trophy stand, clearing its five year cobwebs. Nadal remains yet without a grand slam since 2014.

Pete Sampras announced his retirement as a 14 grand Slam champion, a year after winning his last title at the 2002 US Open at age 32. The rivalry of Federer and Nadal brings back nostalgic memories of the tumultuous Andre Agassi and Pete Sampras rivalry on the courts. Sampras had suffered a two year hiatus without a title and more losses than wins against Agassi before beating him in that epic 2002 US open final.

Now that The Ballerina has trumped over his arch rival Nadal, who has more head to head wins (23) over Federer (12), will the Fed Express also fondly known as The Ballerina retire like Sampras?

There was a hint, when the great man said, after the grueling five sets, three hours and 37 minutes in which he beat Rafa and on the grand courts of the Australian Open, before adoring but mystified fans across the world: "I hope to see you next year, but if not, this was a wonderful run here and I can't be more happy to have won tonight."

What did he mean by "if not"? Did he mean he is retiring? Interpretations are now raging in the tennis world. I refuse to accept that he will throw in the racket. Hence, I am in concert with Juan M. del Potro's appreciative wail: "Thank you both, don't you ever quit tennis!! GRANDEEE ROGER! So Inspiring."

No. Not yet. We can't afford to lose the captivating magic, the music of his flow, the Ballerina's subtlety of motion, the sublime and silky skills, the exquisite backhands, the beauty of his genius. When sports greats like Roger Federer or Mohammed Ali retire, the world loses their peculiar genius gifts and their profound tapestry of panache, entertainment, skills, drive and mastery.

I therefore plead: Don't go yet, The Ballerina, don't go.