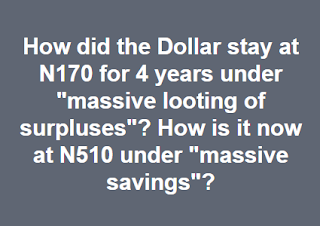 They managed to keep inflation at single digit whereas it has now climbed to double digits and approaching 19% as at December 2016.

This is my attempt at answering this poser. It all comes down to the fiscal and monetary policies of the previous government and the current one.

The former economic managers had the advantage of earning more dollars but they had a liberal policy in place and ensured people and businesses could bring in forex and take it out at will.

There was free entry and exit. No restriction. They attracted FDI's, they encouraged e-commerce along with a cashless society so there was 'enough' dollars to meet demand.

They did well and only ran into problem when they tried to do what this current government has now turned into policy, try to defend the Naira and not devalue.

They significantly reduced our reserves as speculators attacked the Naira. They retraced their steps.

The current government on the other hand have artificially tried to control the forex rates but in the most abysmal manner with multiple exchange rates that encourages round tripping and corruption.

We imposed a ban on 41 items and drove them to the parallel market thereby driving up demand there.

The resultant effect of driving prices up in the parallel market is that they drove prices of most items denominated in dollars up.

From petroleum products (petrol, kerosine, generator) etc to transportation to manufacturing inputs, prices increased and drove up prices in all other areas hence our transition to double digit inflation.

There is no synergy between fiscal and monetary policy. The Monetary Policy Committee whose sole responsibility is monetary policy have thrown their hands up in surrender as they lamented government's fiscal policy which were at odds with monetary policies.

This government practically made it impossible for manufacturers to access inputs in the name of forcing them to look inwards imagining that such transition can be made automatically. So the difference is really a function of economic managers.

As of 2015 our challenge was that we didn't have enough dollars and what was required was to attract dollars into our economy rather we did the opposite and experienced capital flight. That sir in summary is the economics of the poser posted.