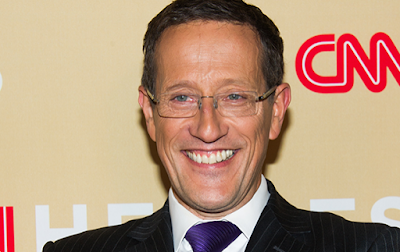 This under-development is really a problem, because I don't see how Richard Quest coming to Nigeria could ever be a big deal.

He is an economist, I think. A business anchor. An employee of CNN. I find his show to be all over the place sometimes.

What could he possibly say to us that we don't already know? He has a job analysing facts and figures. He knows nothing about us, probably doesn't even care. He is presented with the jollof rice war eventually after sharing his priceless fact:

"Nigerian youths have what it takes to be great" or something like that.

Oh? We didn't know that until Quest opened our eyes?

He is an employee of a news station. Just like the business reporter on Channels.

It's always something to watch as the country pauses and holds its breath when someone/anyone from overseas comes around this deep end.

Does Mo Abudu get the same treatment when she shows up at Atlanta, Georgia amongst Americans (not diasporans)?

If it wasn't for third world wahala she should rank higher in status than Quest.
Quest is Ebuka on Ebony Life.
Quest is Toolz on Beatfm.
Quest is Tunji Andrews (on Twitter).

Did you see how vigorously people were shaking their heads w
hen he spoke like he was actually telling us something we don't already know? Something someone like Ayo Sogunro hasn't already talked about on his blog? (All the priceless articles and tweets Ayo has shared. This prophet is not fully appreciated amongst his own people)

This our third world status... what it is doing to us ehn.

It seems like we can't tell the difference between one white person from the other.

There is Mark Zuckerberg and Warren Buffett...and there are the employees that work for them.

E.g: There's the receptionist at Facebook. And there's the cashier at any of Buffet's hundreds of companies... There's the staff writer at CNN and there's Ted Turner.

They may all be white but they are not all the same.

I don't want our children thinking that all you need to be is white... then an entire continent will pause as you pay a visit.