Home / religious community / Jesus Did Not Run A Ponzi Scheme By Collecting For Himself And Promising People Divine Riches.

Jesus Did Not Run A Ponzi Scheme By Collecting For Himself And Promising People Divine Riches. 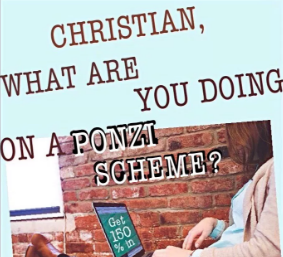 I will put up something detailed about tithing before this quarter runs out but I want Nigerian Christians to understand that tithing is demonic- not that I believe in the supernatural.

It's absolutely wrong and a corrupt system that favoured the greedy Pharisees.

Jesus was so angry at money making schemes in the church and the tithe collectors who accommodated such schemes that he became violent, flogging and cursing.

At one instance, he referred to tithe collectors as 'whitened sepulcher,' as part of my study, I had to find out the meaning of that idiomatic expression and it was far worse than being called a hypocrite.

Jesus' message and lifestyle is the basis of Christianity not what the Pharisees did.

Jesus never collected tithes or offerings and the system he set up for the Christian ministry curbed the corruption in the tithing system.

Jesus' financial structure was altruistic with the simple principle of Christians gathering voluntary offerings and these monies don't go to the pastor but the congregation especially the poorest.

Jesus did not run a Ponzi scheme by collecting for himself and promising people divine riches.

Jesus wanted salvation and his financial structure is exemplified in two instances to show continuity of policies to guide finance of the Christian gathering.

First financial structure by Jesus himself;

In Matthew 14:13-21, Jesus receives offerings to his ministry during a convention, the offerings were loaves of bread and fishes. It's important to note that Jesus didn't feed himself to have energy for the long ministration to such a huge crowd.

Jesus was ministering on an empty stomach and shared the loaves of bread and fish fingers back to the congregation because church donations are not for the pastor or the business but for the congregation to share there and then.

That's a good question so as to establish continuity in policy from one church leader-Jesus- to the next apostolic generation led by Peter and Paul.

We can appreciate the continuity of this financial policy in
Acts 2:44-46

'And all the believers met together in one place and shared everything they had. They sold their property and possessions and shared the money with those in need.'

We see that Paul continued that altruistic financial structure that was better than the corrupt Pharisees' tithing system.

"Gather monies and give to me or your pastor."

Jesus and Paul didn't collect people's money for themselves, they avoided the corruption in the system that Pharisees ran at the time.

These two decisions by two generations of church leadership shows a continuity of policy so who are Nigerian pastors to return to the corrupt policy of the Pharisees?

How do they justify a Jewish cultural practice when they are not Jews?

How can Nigerian pastors demand tithes when none of them has ever done a Bar mitzvah?

Are they ritualized adult Jews?

What rights do they have to perform that Jewish cultural practice that Jesus and Paul didn't perform in their ministry?

Nigerians are scripturally unsound that's why any thief would mount the pulpit and steal from them.

The apostle Suleimans will become hypocrites worshipped by Nigerians while they live like whitened sepulchers.

Any pastor that collects tithes is a thief and Jesus would curse them too.

Any pastor that sells materials from the gospel is a thief because Paul-the most prolific Christian writer- didn't sell his letters.

Who are pastors to sell daily manna?

God blessed them with the intellect to write so why can't they write for free like Paul did?

The gospel is not a business or hustle, Jesus didn't make a single shekel neither did Paul.

The gospel is for salvation not business.