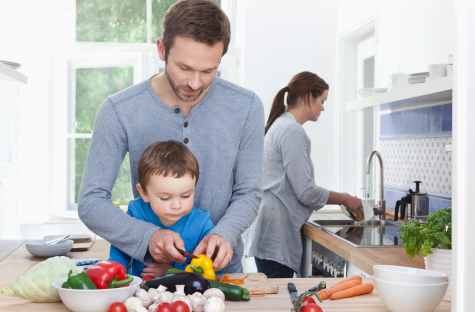 Gender roles are rubbish and the colour pink is not for girls alone, don't claim it.
Tears are natural reactions to emotional and physical distress and they are not for women alone, stop shaming men that cry.
A girl on suit and tie with trousers is not a fashion abomination.
Tomboys are normal not cute, boys and girls would develop naturally into the roles they are most comfortable with if society doesn't reinforce certain barriers that prevent the full expression of each child's personality.
Men can cook, it's not an abomination to have the prerequisites for survival in a zombie apocalypse. Will you ask a female zombie to cook for you when it finally happens?
Housewife is not your portion always, househusbands are more versatile and they are cute.
President of a country is not a male role, you can be a female Nigerian president and do stuff better than London vacationers.
Historically, women had excluded men from the market, they were making all the monies while we were forming head of the compound. Around the early 20th century, Akwaibom men started flooding the market too. Men are now selling everything from afang to women's clothes and underwears better than women because breaking gender barriers is key to a better society.
There is this salon in the center of Uyo, women will queue up to make their hair because it's operated by young men. I think there are some women who can't do a new hairstyle if it's not a male beautician.
To all the male nurses saving lives, I respect and value your contributions to society. Even though I was envious of the male nursing student back in undergrad for having all the girls and regular free food, I still admired you guys.
Last and not the least, I respect and love all the brave women in the military and paramilitary who protect this country from danger. Oga madam, I salute.
There are no specified roles for any gender so stop shaming people.