Some African ancestors don't have sense, they will never tell their people to acquire education or training. All they are concerned with is lobola even in the grave. 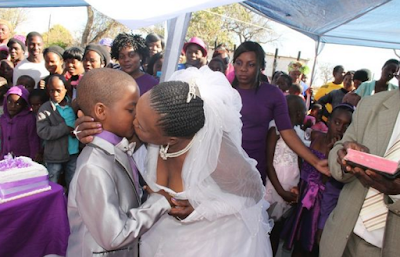 A sad 2013 story of nine year old Sanele Masilela marrying Helen Shabangu, a 62 year old married mother of 3. Her children were old enough to be Sanele's parents but apparently he is now their father-in-law and awkwardly a brother or husband-in-law to Mrs Shabangu's husband.

Why did this embarrassing ceremony happen?

Most Afro-South Africans are very superstitious and the boy approached his family telling them that dead ancestors wanted him to marry Mrs Helen Shabangu; the schoolboy's family immediately raised a lobola or bride price of $500 for the bride's family and $1000 for the marriage ceremony in less than two months!

The marriage went ahead and pictures were taken of the boy kissing his bride to the consternation of educated members of society.

This is the reason why a humanist philosophy is important in tackling ignorance and superstition in Africa.

There is no prove that dead ancestors speak to little children.
A rational life of daily critical thinking is important in navigating a society inundated with superstition.