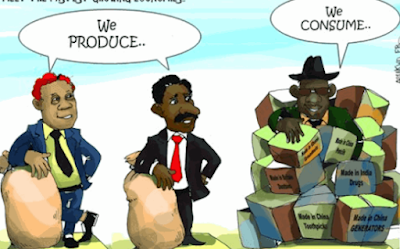 Naija politicians don't groom mentors. They don't understand the idea. They had zero mentorship themselves.

Politicians take the daring ones under their wings. P.As rarely ever get promoted, because those positions often involve belittling tasks of shining shoe, ironing agbada, and indulging in social media roforofo.

A friend of mine had gone to supply a pair of shoe at a Senator's office one morning, and the P.A was asking the Senator to price down a shoe of #7,500 to #5,000. The Senator waved him off, and said "these shoes are made in Nigeria, let us support the makers". Pray, tell, what was the P.A trying to prove in this case?

These guys go about competing for a degree in Abobakuism. How can they be mentees? My State Assembly is populated by people in their 40s, some of them I've sat with on various occasions. They mostly have one thing in common, they dared to show that they mattered, and party men had no choice than to give them a chance.

Some had contested in the past, with little funds, but with the tenacity to galvanise local support and make themselves known. They failed. They tried again. Unfortunately, despite their success, I don't see how much they're helping.

In advance democracies, older politicians extend hands of mentorship to bright, younger folks, but these are actually thinking societies.

Older politicians over there are talking legacies, how would I be remembered, who are my protegees, where would these men be in the next 10-15 years, how would their political career beam a light on my own ideology, how would it propel society forward. Not here.

Here, they point to their wine bar and say: that Champagne over there, I bought it on my last trip to Brazil.