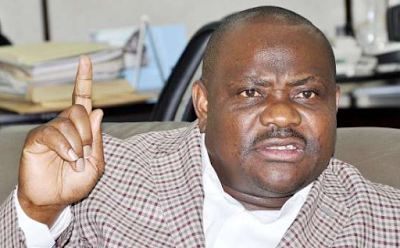 I have read in the nation newspaper some hours ago that my Benue State counterpart Samuel Ortom reacted to my challenge on him to come and witness my finished projects in Rivers in less than two years.

I still insist before the people of Benue that their Governor Ortom cannot do otherwise, when he was Minister under PDP, he wasn't performing. Segun Aganga was doing the work while Ortom was either praying anytime they attended a function.

When he was supervising Aviation Ministry, a lot of billions were missing under his watch. Even when he assumed office, there was a secret petition concerning Airport construction in one of the North Central states against him.

I so much believe that is the reason why he is running shortage of funds in his state. The civil service in Benue should not be surprised if they continue having problems with salaries, I heard he is victimizing civil servants in the name of ghost workers. But on a whole, Benue State Governor is not my match.