"Mother Of All Bombs" Hits Afghanistan 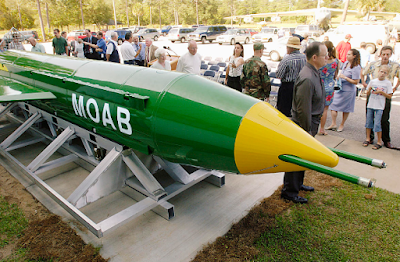 The target of the Massive Ordinance Air Blast (MOAB) also known as the “Mother Of All bombs" are the caves and tunnel complex of ISIS, the Islamic terrorist group.

Clearly, an opposite number of global terrorists is in the White House. Diplomacy is dead. Firepower talks.

President Trump is proving as ruthless and perhaps as "unhinged" as the terrorists. The Afghanistan bombing comes days after US army bombing in Syria as well as Trump's looming threat of military action against North Korea which has nuclear bomb capability.

How exactly will these big guns diplomacy play out? Counter violence from the lunatic terrorists? Or surrender to Trump's trigger happy, superior fire power, America? No one knows. The world watches with trepidation. Keep your fingers crossed.