Home / local / ECONOMIC RECOVERY GROWTH PLAN (ERGP): There Hasn't Been Any Major Critique Of Its Contents

ECONOMIC RECOVERY GROWTH PLAN (ERGP): There Hasn't Been Any Major Critique Of Its Contents

Since the government unveiled the ECONOMIC RECOVERY GROWTH PLAN (ERGP) in February, 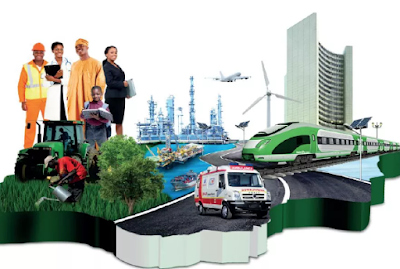 there hasn't been any major critique of its contents, until yesterday.

The IMF, the first major institution to critique the ERGP, says there are deep reservations that the growth plan may not achieve its objectives until certain macro-economic conditions are met.

What caught my attention, was the diversification of the economy, and the Forex regime, issues I have discussed on several occasions.

The words, and the actions are conflicting.

For how long are we going to keep defending the Naira using dollars dependent on the cyclical price of crude oil?

A stable naira is good, but that should be organic, dependent on the aggregate of local goods manufactured using favourable comparative cost advantage, and unavoidable imports.

Pumping dollars into the market will simply feed old ostentatious habits of importing even goods you can produce in your backyard.

The agricultural sector is picking up, but it is not as cordinated as people are being led to believe. It is more a case of people looking inwards in the face of challenges, than a Government engaging in a robust emancipation plan.

Anyway, the IMF is one body. I await further critique from other bodies and seasoned financial experts.

The FG would do well to heed its advice though (without pandering to its interests). Those investors we seek to attract take such critiques seriously.