Home / local / Your Silence Today Can Aptly Be Deemed Hypocritical

Your Silence Today Can Aptly Be Deemed Hypocritical 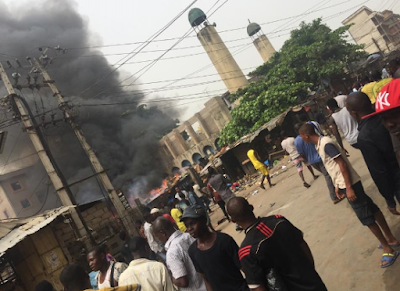 I remember sometime last year or late 2015, when there was a protest in Onitsha and there were stories of Igbo boys heading to set the main Mosque in Onitsha on fire.

I remember my friend Oluwakayode Olumide Ogundamisi tried so hard dishing out information almost on per second basis, in a way that sought to incite the Northerners into believing the Mosque at Onitsha had been destroyed, even as peacemakers were trying so hard to make everyone see reason. Most of the updates that almost caused rancour during that time emanated from his wall.

But to his utter disappointment, reason prevailed in Onitsha and no life was lost.

Today, the same Kayode is silent on the carnage that took place at Ife, and so are many others who became emergency News Casters during the Onitsha episode sharing photos and updates like they were going out of fashion.

I hope everyone knows the roles they played then and now. It is the hope that if you were making noise then but are quiet now, that some growing up has taken place. Because if you are indeed consistent in your views then as at now, you would realise that the Onitsha episode pales into insignificance as compared to Ife where I gather numerous lives were lost.

Your silence today can aptly be deemed Hypocritical.

It is also my hope that those affected find Justice. What part of Nigeria they hail from and the antecedents of whatever we think of their kin who are herdsmen is immaterial.

In a society that sincerely seeks to grow, every life should matter.

I said so when the perpetrators were Northerners, I will repeat it as regards Ife today that the Northerners are mostly victims.