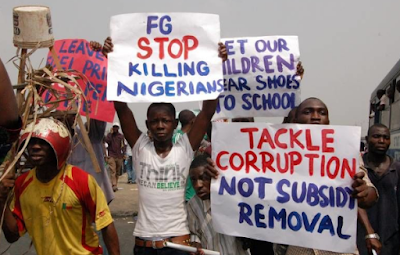 Nigeria. Amazing country. Nowhere else in the whole wide world is governance about hoodwinking the people than in Nigeria. I guess the people love being taken for a ride.

Buhari, EFCC and DSS imbroglio. Buhari, Ali and Senate roforofo. Millions of Naira (is it dollars) found at airport. Dino is not graduate. Saraki did not pay duties on a luxury car. Magu is deemed corrupt by DSS but remains in office despite non-confirmation by Senate.

Meanwhile 52 citizens have been dispatched in cold blood in Zaki Ibiam, to the great beyond by "armed men." Number of citizens dead from a bombing attack by a Nigerian military jet in an IDP Camp in Bornu has climbed to 236.

Several citizens are believed dead and many injured in an ethnic (Yoruba vs Hausa-Fulani) clash in Ile-Ife, Osun State. El-Zakzaky and his wife remain detained despite court orders that they be released since December 2016.

The Naira continues to take a proper drenching despite the buckets of dollars poured to feed its voracious hunger.

They remain the expensive responsibilities of individual citizens who pay charges, fees and taxes for no services.

Let Buhari and Saraki and Dino, and Colonel Ali and Magu continue with their absurd drama of the bizarre. This is Nigeria.