You are peddling this presentation by my friend Roman Oseghale whose positions on some economic issues, where we took opposing views, have been resolved in my favour by time. Recent examples being change in government policies on Niger Delta and Foreign Exchange. 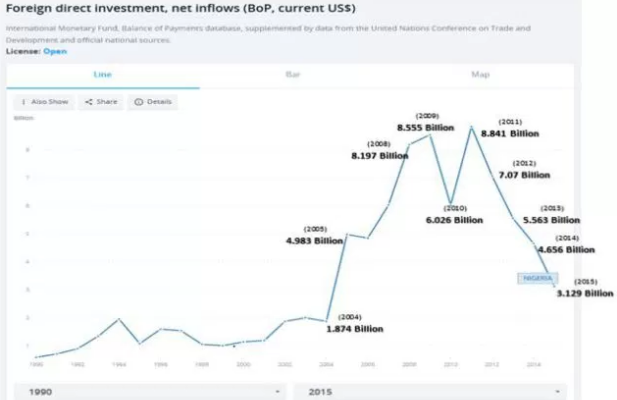 I feel for him as government's about turn have left him, after his spirited defense, up the Creek without a paddle. But back to the issue at hand. In the build up to the 2015 elections I presented statistics to back my arguments but was told by many of my co debaters at the time that the statistics were cooked up or wrong.

I told them for a fact that the rejected statistics will eventually be corner stone. So I am glad that these statistics are being shared today. They are the very basis of my wonder at what the Buhari led APC presented as campaign promises and their lethargic attitude to the economy when they took over. Their actions had no bearing with the economic reality that was obvious to any discerning and objective analysis of statistics at the time.

Let me quickly do a historical summary before I come back to that. OBJ's regime started Nigeria on the part of economic growth by laying a foundation. His biggest achievement was privatization of public enterprises. And the legacy projects being the GSM revolution and debt forgiveness. He then concentrated on building our reserves but as a cost. His government did very little in terms of infrastructural development.

The Lagos- Ibadan, Sagamu- Benin and other highways across the country bear testimony to this neglect. But we saved money. It is a good traditional approach to economic freedom but it does not create exponential wealth.

He started investing in power projects at the twilight of his presidency with a focus on big power plants but his tenure ended. OBJ's third term project was actually because he wanted to implement his power programme and add to his credit..

Yar Ardua came in and his administration spent a significant time strategizing and remodeling the power programme with a focus on IPP's like the Lagos model but then he passed on. The foundation of the agricultural programme of Jonathan was also laid at this point.

We grew reserves naturally because we didn't do much spending on infrastructure either. It is interesting that there is an acknowledgement of the OBJ and Yar Ardua years now as periods of economic growth when the narrative was that the 16 years of PDP was a waste.

It was Jonathan that started implementing the economic blueprint whose development started doing the Yar Ardua years. The Acting President and Fashola both have come out to acknowledge what was done in the area of power plants by the Jonathan regime.

By Prof Osibajo's own admission we have already developed on in development close to 12,000 megawatts of power which a number of factors, with funding, vandalism and pricing being chief impediments to getting electricity out of them.

Fashola of recent said we actually have 7,000 installed capacity although we are only generating about 4,000 megawatts due mainly to gas shortages. It is also on record that Fashola said the Jonathan administration built more roads than any other government in the history of Nigeria. Of course the bit about agriculture and the modest achievement in rail transportation have also been acknowledged.

My point is you can't eat your cake and have it. If we spend money on infrastructure, where there has been negligible spending before, we won't have the same value in our reserves. It is simple common sense. Which business keeps a huge cash reserve instead of investing in activities that will drive growth? So the Jonathan government had a good economic plan driven by free market economy to propel growth.

That ideological leaning was a major departure from our previous leanings and it aligned very much with mine. So they did spend and the Nigerian economy grew to a high of 6+% with Nigeria becoming the biggest economy by GDP in Africa.(Roman by the way saw the statistics then as cooked up but has no choice than to admit the statistical reality that our economic has slipped off the economic ladder today). So we did spend under Jonathan and naturally we had less in our reserves but it was still around $40b+ in 2014 before oil prices fell.

Now let me now go back to what happened to us thereafter and our journey to recession. The foundation was laid in 2012 when Nigerians opposed fuel subsidy and we filtered away most of the gains we made in the oil windfall by continuing payment of a dubious subsidy. If Jonathan displayed weakness in not defying Nigerians, we know those who instigated the protests.

We threw billions of dollars away ( trillions in Naira through legitimized corruption which Nigerians gullibly endorsed. The second issue was that we dipped our hands into the Excess Crude Account following the victory of the Governors led by Amaechi, Oshiomole and Fashola at the court. So we further depleted our reserves and stopped saving.

Then the Jonathan administration, for political reasons, did the unthinkable of trying to defend the Naira after oil prices fell in 2014 resulting in a significant depletion of our reserves. Economic reality later prevailed over political expediency in late 2014 when they marginally devalued.

Of course given this scenario, Fitch downgraded our ratings as the danger signs were now obvious that the Nigerian economy was heading into turbulent waters. This is where this administration comes in. Given this scenario,

I was shocked at the nature of their promises as it had no bearing on Nigeria's immediate reality. The APC basket of promises were at variance with the satisfies that Roman Oseghale is now posting. How do we speak of Naira parity with dollar given the statistics presented in this post? Perhaps now you will understand better why I said our short term challenge was to improve dollar inflows into Nigeria by a liberalized policy that will encourage FDI's and other ways and means of improving aggregate supply of dollars in our economy. This statistics shared was the basis for that argument but the government was talking of long term solutions of diversification. How? They got the problem totally wrong and of course the strategy.

The same Fitch and World Bank were optimistic about the Nigerian economy following the successful transition in 2015 but what happened, we did not give priority to the economy and went about 'fighting corruption and trying to recover money', that has not yielded much by way of returns. Pray how many people have been jailed at what cost to our economy? Contrast that to the recent Whistle Blowing Policy which has the capacity to actually bring monies out.

Had we also put in place a better forex policy, those who hid money would have brought it out voluntarily to play in the market and the economy would have benefitted in the short term. It still does not stop them from being prosecuted. We compounded our problem with forex policies that hindered supply whilst trying to control demand ( a function of behaviour).

Who does that? So businesses that could not get dollars through official window went to the parallel market. They drove rates up and individuals joined as they panicked and started saving in dollars and pounds as a hedge against inflation and devaluation. So everyone participated in a policy induced run on the Naira. Differentiated rates for different categories of people and businesses now created a perfect environment for round tripping. In the end, dollar prices affected everything and inflation went out of control.

As economic activity contracted I echoed the views of experts who were pointing at statistics to say we were heading into recession if we didn't do something. Again, my friend was one of those who said we were just being alarmists. So we did not take the remedial action that could have staved in off. And so after denial we ended up where some of us said we would get to, only six months after.

The Acting President is being hailed for addressing what have been canvassed since the second half of 2015 in 2017. I thank God for the belated action but there is nothing to hail. It is ridiculous for the CBN to be telling us then can meet dollar demands now because they have a $30b reserve now. (they added $5b) when they met more than that when they took over and filtered it away defending the Naira and continuation of subsidy payments through forex differential on fuel importation. The rate for fuel importation is N280 but official rate was N305 (so we subsidize with N25 for every $1.

The sum of my argument is that this government (as well as supporters like Roman and yourself) ignored these statistics that has been around since, pointing us in the direction of an economic meltdown if remedial action was not taken.

And in so doing a bad situation that would had led to a contraction of the economy to 2% led to a decline of -2% taking us into full blown recession. Finally, had those in this government been patriotic and supported subsidy removal in 2012 as well as PUSH the Jonathan administration to continue saving in the Excess Crude Account instead of engineering its sharing, perhaps there would have been less money to steal and a lot more in our reserves today. But they forgot about karma.

It is their mess now and they have to clean it up. I have written 'extempore' using information from residual memory but to the best of my knowledge the information provided in this write up will stand the accuracy test when subjected to information in the public domain.

Everything is about the spin today and it is really bothersome that two years into the life of this administration, we are still debating about who caused what? But let me take us back to the write up again so we note that the economy left by years of successive military rule and a short lived interim government was in ruins when OBJ took over.

Buhari was a part of that by the way and OBJ did not lament his fate. He just got on with it. No one tried to make excuses for him yet he was practically hurled out of jail into Aso Rock with a very limited stay as Head of State as experience. He had months not 12 years of repeated trying to prepare for the position of President.

He just got on with it. The wheels of government of this administrative is finally rolling, can we please join hands in pushing it into motion and waste less energy on how a bus that was sputtering along mid-way into third mainland bridge, had somehow rolled back to the foot of the bridge at Oworonshoki? Let us be thankful that the Assistant driver is showing more dexterity at the wheel than his boss and seems likely to get us in motion again.
For now, let please us face forward