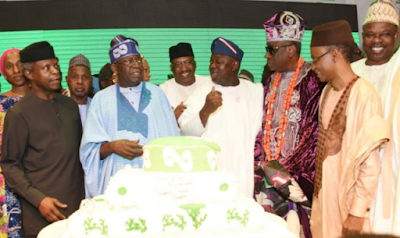 Two years after the All Progressive Congress (APC) Party and President Muhammadu Buhari won power at the political centre, Nigeria looks increasingly like the desolation. Many wonder how we came to such an ugly pass.

The answer lies in one man: Bola Ahmed Tinubu. But before I explain why, permit me to indulge in a favourite past time: Personality comparison. This time of Bola Ahmed Tinubu and James Onanefe Ibori.

Both were born in the 1950s (not many believe their birth dates). Both were two time governors (1999-2007). They were among the poster young men swapping the flags of political power from the old generation. Both came into political limelight from relative obscurity.

They became suddenly rich enough (no one, until today, can confirm the sources of their then loaded egg nests) to set up and fund powerful political structures in their spheres of power. As Tinubu was in Lagos State, so was Ibori in Delta State. Both bear pretty heavy titles depicting power even by tonality: The Asiwaju of Lagos/Jagaban of Borgu Kingdom and The Ogidigborigbo of Africa.

Both were victims of the earthmoving blitzkrieg called Olusegun Obasanjo, two time President (1999-2007), former military head of state (1979-1983), the Ebora Owu (mystical or spiritual being of power), Baba Iyabo and Nigeria's "only living ancestor".

Whereas Governor Tinubu courageously stood his ground and eyeballed Obasanjo on several matters, James Ibori capitulated in crucial moments, in self survival. Tinubu thumbed his nose at Obasanjo who like a hurricane swept off the entire governors of the South West region with a most cunning political strategy save for Tinubu who in spite of Obasanjo's federal might bullying, scored a second term in office.

But the Ebora has an elephantine memory. When Lagos State under Tinubu decided to create 37 local council development areas (LCDAs) from its then 20 local government areas, Obasanjo pounced. It was unconstitutional he pronounced. To enforce his directive that Tinubu stops the LCDAs creation in Lagos, Obasanjo withheld the state's federal allocations for years. But it turned out the elixir for Lagos to look inwards and indeed find the very rich motherlode of tax revenues. Once again, Obasanjo was outwitted. Lagos thrived. Tinubu gained tremendous image boost. Wrestling the Ebora to the ground is no mean feat. Ask Atiku Abubakar or James Ibori.

The comparison between both men continues. James Ibori and Bola Tinubu are highly motivated men, ambitious for political power. They both lusted after and actively strove to be Vice President of Nigeria under the men they sponsored as Presidents as their own route to the presidency itself. Both failed in their bids: Ibori in 2007 and Tinubu in 2015.

Ibori's shenanigans under President Musa Yar' Adua and much reported disdain for the then Vice President Goodluck Jonathan drew bad blood. When Jonathan became President after Yar'Adua passed on, Ibori zapped out of the country on self exile to escape retribution. But karma was on his tail all the way to Dubai where he got arrested. From there he was hauled to and then jailed in London for corrupt enrichment.

Meanwhile Tinubu has been back home in Nigeria with growing wealth and political power. He extended his political control beyond Lagos to almost all of the south west region and built powerful alliances across the country. He reached out to the north, dusted up General Muhammadu Buhari rtd, the perennial political loss leader into the presidential candidate of a new political vehicle, the All Progressive Congress Party which swept the ruling party, the People's Democratic Party and sitting President Jonathan from power.

You would think that Tinubu's pepper had arrived and rested. That he was to easily put his own power strategy into play with his party and the man he supported right on to the center of power. Instead he received rude shocks. For suddenly, his political flowering began to be buffeted by billowing Sirocco winds.

His personal dream to be Vice President was neatly shredded. As compensation, his aide Professor Yemi Osinbajo was picked. Politically powerful and well heeled men don't make VP in Nigerian politics. But the humiliation did not stop there.

His control of the Party, also, was ruthlessly torn from him so that he watched baffled as otherwise not too loyal lieutenants were picked to political appointments in spite of him and his choice for Senate President was upended for the wily and controversial Senator Bukola Saraki.

The northern political elite were in adroit display of no-holds-barred political chicanery. Ahmed Bola Tinubu was cut to size. But he is a smart man. He cut his losses, kept his cool, played along and quietly began to build a stronger home base in the south west. He still has a political base and a trump card to play in the next political trade off for power. These days he says little.

Unlike Tinubu who has the south west region as his aces, James Ibori returned from jail in London to loyal lieutenants in just Delta State which he controlled and whose governors and other state officials he handpicked from incarceration in London. Will the Ogidigborigbo be able to extend his reach beyond Delta State? Apart from one or two federal legislators, Ibori has little or no arsenal at the political centre.

Tinubu on the other hand fields a galaxy of senators, members of House of Representatives, ministers and many other appointees. It is doubtful though if many in this galaxy still owe him allegiance. It is a cloak and daggers business, this quicksand deal called politics.

But let's return to the issue of Ahmed Tinubu as the man to answer why Nigeria is increasingly like the desolation. Tinubu, as already stated, is an ambitious man who admirably built a strong political structure at least in his Lagos home base and almost all of the South West region. But he wants to enlarge his coast and be President.

The strategy was to organize a credible opposition party, defeat the incumbent party and negotiate to be vice president as but one step to his ambition. With superb negotiation skills, he organized political heavyweights on the rumble, including even the ruling party's governors, who came tumbling onto his party.

But the organizing genius of the man made three critical errors:
First. He chose to support an aged Fulani feudalist ex-general and former dictator (1983-1985) as Presidential candidate of the party. He must have thought that with an old, ailing Buhari, with the support of both the north and the powerful clique of ex-generals, the coast certainly was clear for him.

Second. He invested great political savvy, quantum level of energy, heavy funding and corralled political allies to support the Buhari's presidency. But he underestimated Buhari, the ex-generals and the conservative north. Just as James Ibori underestimated Goodluck Jonathan (that is story for another day). It would appear that despite his many political gifts, Tinubu seem not to have a keen sense of history.

He ought have known that Buhari and his inner circle would never yield the Vice President position to him no matter his contributions. In Nigerian politics, the Vice President, historically, must be at best, an effigy. Tinubu did not qualify. He was a strong personality with a solid political structure. He also did not learn from his Yoruba forebears (Awo and Abiola) who were denied the presidency by the very folks he courted and midwifed to power.

Third: He deliberately deceived the nation by presenting Buhari, as the new deal. He used sophisticated image builders to panel beat, fill with potty and re-spray the old choleric General with bright vibrant rainbow colours depicting he is efficient, trustworthy, a reborn democrat, incorruptible and the veritable answer to Nigeria's many challenges. Using his vast media control, he steamrolled over doubts and questions about Buhari. The nation is the worse for it today.

He ruthlessly deployed the media and whipped Nigerians into mass hysteria as Hitler did with the Germans. He painted frightful hyperboles and pumped pure bile, hate, abuse and lies into the political system. He structured a massive Goebbelian machinery that spewed corrosive rhetoric from rumour factories that networked traditional, online and social media outlets, often led by brainwashed or palm greased intellectuals.

All these culminated into the emergence of vile propaganda, a new political culture. All of which coalesced into Buhari as President, one who ignored debates, one for whom all who doubted or questioned were labeled corrupt or crooks. Tinubu knew that he was structuring and presenting a candidate that will not deliver the goods.

Tinubu must admit that he made a costly political mistake at the expense of the country. That the blame for the failures of the past two years lies squarely with him. His political experiment has afflicted the country, for two years, with economic recession and rudderless leadership. Initiative is nil. Vision is zero. Inspiration is nada. New investments is zilch. Unemployment is soaring. Inflation is spiraling, Naira value had plunged. Poverty is skyrocketing. Hunger is mushrooming. This certainly is not the change which the Jagaban and APC promised. This certainly is the definition of disaster.

The Jagaban must look at the past two years with wistful regrets except he given to willful villainy which I strongly doubt. But has Tinubu learnt from the experience? Will decency and urbanity guide his next foray into national politics? Will he stop vile propaganda? Will he continue to seek unprogressive alliances? Time will tell.

Tinubu may be politically emasculated at the political center. The Lion of Bourdillion may lie wounded. But he quietly recuperates and rebuilds. He remains a very potent political force, one still very much admired by many. Lagos State under him and his political sprouts has been nothing short of amazing in vision and development. Unlike his political other, the Ogidigborigbo, under whose political control, Delta State has, in the past 18 years, been reduced to desolation, a shadow of bouyancy.

I hope, with fervent prayers, that the Jagaban of Borgu, Bola Ahmed Tinubu, the Lion of Bourdillon, will be man enough to rise from the muck of vile propaganda and winning at all cost, to embrace the culture, the light and the urbanity of great political leadership in his next foray. That is, if he will escape, the claws of Karma like he, to whom, he is compared.

Finally, I say to the wily political strategist, the Asiwaju of Lagos: