STAY AWAY FROM COW MEAT 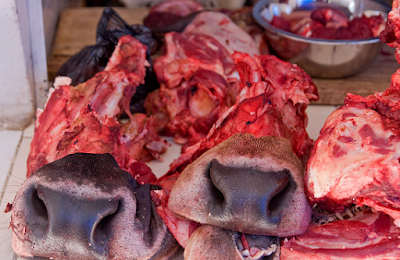 With Effect from February 1st till date, Christians all over Nigeria have been asked to stop eating cow meat.
The ban has been effected on February 1st in solidarity for the lives of our dear Christian brothers and sisters slaughtered by wicked Islamists.
We are advised to eat more of Fish, bush meat, PIG, native goat, chicken, duck, snails etc
Our Christian Leaders have come to the conclusion that muslims love their cows more than they love and value Christians.
They now kill Christians to prepare suya for Christians to eat.
Christians are the major patrons of their cow meat business. You would think that that is enough for them to respect Christians.
Imagine the Southern Kaduna killings. Hundreds of Christians slaughtered by Islam and the PMB govt and El Rufai's govt said nothing. The presidency said that the president does not have to react to all situations but immediately condemned the incident in maiduguri where three people died.
Governor El Rufai said he paid the people not to attack the Southern Kaduna Christians but it turns out he paid them to attack.
The only way to send them a message and earn their respect is to impact their economy by staying away from cow meat. This is the only way we can crumble their economy and bring them to respect Christians.
We need one voice and cooperation now.
Please share on Facebook and other social media, to all your whatsapp contacts and groups and please keep rebroadcasting until it gets to everyone.