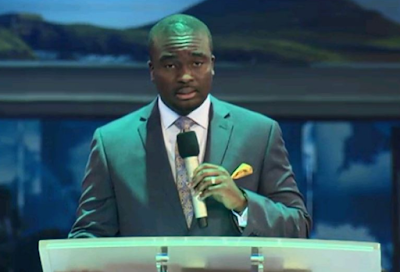 David Oyedepo Jnr, often tells his story of how he used to be very shy. I was even worse🙋🏽! Speaking, or just coming out of my comfort zone, was a weight on my shoulders.

I dreaded it, I hated it. I always hid from anything that required such from me🙌🏾In High School and while I was a student at uofoklahoma when I was expected to speak or present, something often conveniently came up😆 which passed that responsibility on.

I'm telling you, those were terrifying days. Literally!! Some of you can relate.Even with advanced notice, I'd be up all night thinking about it🙄

When we got married, I couldn't hide from some responsibilities and sometimes, I pleaded with  to let David Oyedepo the cup pass me by.

He always told me that the only way to kill my fear of doing what I'm not used to, was by just doing it. It wasn't by confessing that I was as bold as a lion yet I refused to roar when required, like most of us do.

It wasn't by saying someday I will, it was by seizing any opportunity given to me. It was by making mistakes and learning from them.

Hhmm I've made some serious mistakes😄but we thank God for His mercies🙌🏾I told you that long and hopefully interesting story to tell you this; it is in coming out of my comfort zone that I really knew what God created me for.

If you feel inadequate for any reason, it's important to willingly step out and let the grace of God take you through.

This is not just about public speaking or anything like that. It may even be about telling people about Jesus Christ. It's about absolutely anything in life that you know God has told you to do.

Wanna know something? That thing you are running away from, may actually be where your shinning is! It's not by just calling yourself a beacon of light. It's by taking some risks that may inconvenience you.

Whatever it is, your goal should be that through your light, people have reasons to glorify your Father in heaven.

The Holy Spirit reminded me that if I never stepped out of that 'zone', even I won't have known the treasures that God placed inside me! While 1 Cor 2:9 is a reality; know that it requires something from you that you're not used to. Dig deep and amp; bring it out.