Home / local / CONGRATS TO THE ONE VOICE NIGEIRA PROTEST

CONGRATS TO THE ONE VOICE NIGEIRA PROTEST 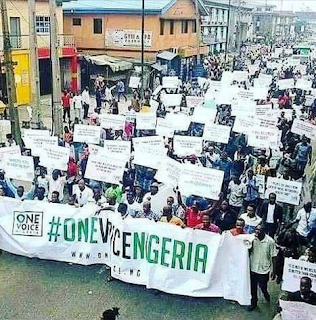 Tuface or no Tuface, It is nice to see that after Tuface chickened out under pressure (shame on him!), the issues and anger in the land were still strong enough to bring our thousands of people, from ALL PARTIES, to make their voices heard on issues affecting our land.

I only wish I was still in Nigeria right now to join them complete with my 'Buharist' TShirt (or maybe not in Buharist Tshirt since I just may get lynched and burnt to death by the angry crowd!),so the govt will understand its not only people opposition that is upset at them. Many objective Buharists too are very disillusioned at this point.

I say, Kudos to Charly Boy, Seyi Law and the other groups and well meaning personalities and regular individuals who stepped up and made Tuface IRRELEVANT when it comes to making the voices of the masses heard. Now Tuface, and other influential personalities should understand that while anyone with a big following can call for a protest, Nigeria is way bigger than the voice of one man to stop the protest.

I will not join critics of the protest, who would rather focus on the personal motives of the protest organizers, instead of what their protest represent. To me the personalities involved are really IRRELEVANT. Rather I would want us to focus on what the demonstrators are fighting for, and then decide to commend or oppose them based on the ISSUES THEY RAISED.

In this case, regardless of who is 'behind' the protests as the govt will like us to believe, these people were demonstrating on salient issues and the govt will do well to HEAR THEM LOUD AND CLEAR , as Acting President Osinbajo has rightly done, and then do SOMETHING about those issues.

This one can't be swept under the carpet.