I Stand With Bishop Oyedepo

WHO IS CONDEMNING BISHOP OYEDEPO FOR HIS RELIGIOUS 'BALANCE OF TERROR' SPEECH? I STAND WITH THE BISHOP 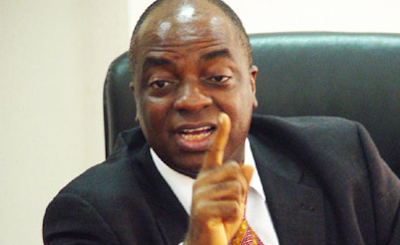 Esteemed friends, please permit me to be controversial and refuse to be one of those condemning Bishop Oyedepo for his admitedly incendiary diatribe against Boko Haram terrorists; corrupt politicians sponsoring them; and against all evil doers against the church.

At some point somebody has to stand up and balance the terror against the Christian faith!
First, I think bishop Oyedepo's people are wrong for even trying to deny the Bishop's speech by claiming the video was not recent or that it was doctored. While It's true it was not recent, that is NOT the point. The important thing here is he SAID IT. It's his picture and it's his voice in the video . I am personally convinced it was not a doctored video but what he spoke about a few years ago was totally justified in my own opinion. So, Instead of denying what is really not deniable (the video is him!), the church should be DIGGING IN TO DEFEND HIS 'SERMON'

I think instead of going on the defensive, what his church should be doing is joining issues with those condemning him. That would have a better effect of forcing govt to take the frustration of many Christians very serious.

There is an urgent need to BALANCE THE TERROR OF BOKO HARAM! They keep terrorizing Christians and even other moslems and at some point somebody has to balance that Terror by calling them by their names and cursing them to death! This is war people and we better wake up if govt is not going to defend us against terrorists. That is what he was saying BEFORE this govt even came to power.

I have watched the video and all the man was doing in it was BALANCING THE TERROR at a time the church was in danger of being overrun by BOKO Haram terrorists while GEJ appeared powerless to reign them in.

He was emotional.
He was beside himself with anguish and anger
He sounded like a man who has been pushed to the wall.

WE MUST TAKE ALL THAT IN CONTEXT in our reaction to this Old video!

I am a very strong advocate of the school of thought that the best way to fight terror is with terror. The only language bullies understand is for you to bully right back, HARDER!

When a group of terrorists decided they want to keep terrorizing the church by Bombing churches and stoning Pastors wife to death and killing Christians at willl, then somebody in the church MUST STAND UP LIKE DAVID AND CONFRONT THE GOLIATH MADNESS WITH EVEN MORE MADNESS.

I am with Oyedepo 100%! I STAND WITH BISHOP OYEDEPO ON THIS ONE.

All he has done was to CURSE anyone supporting Biko Haram terrorists. What is wrong with that?

All he has done was to CURSE corrupt politicians and people supporting them and allowing captured terrorists to escape. WHAT IS WRONG WITH THAT?

All he has done was tell the people to kill any terrorists that showed up to kill them? It's called self defense and what is wrong with that?

Whether he spoke it in 2015 or 2017, he is on point! No need for him or his church to apologise or deny anything. The church is under siege and it's about time a big name steps up and BALANCE THE TERROR.

I join Oyedepo and I say too: May God curse to death all Biko haram insurgents who have decided to terrorize Christians and worshippers!

May the fire of the almighty God consume every terrorist trying to kill Christians as they worship their God!

Yes Oyedepo's words were harsh but that was to create a BALANCE OF TERROR. You don't beg terrorists and you don't pray for evil. You confront evil with whatever you have. The man has prayers and an audience and he is using it. Sorry if you don't like it.

I love muslims. I love god fearing muslims who are mostly incredibly loving. Some of my best friends in the world are Muslims. I admire some loving and peaceful Muslims like Mamalet and Alhaji Adinni who wake up every morning and PRAY for everyone , Muslim and christian alike in their muslim tongues.

They approach issues with temperance and wisdom and I actually and sincerely look forward to their morning prayers here.

So I have no beef with Muslims or moslem religion. But we all can't deny that there are cold hearted muderers and terrorists and religious fundamentalists who are using the name of Allah to perpetrate evil everywhere and they must be confronted and destroyed!

I cannot but marvel at the hypocrisy of some people claiming to be Muslims who are condemning Oyedepo.

Imagine what would happen if some mad people calling themselves Christians were to go about bombing mosques and killing moslems during Friday prayers! Nigeria would have been on fire a long time ago!

Imagine people claiming to be Christians stoning an Imam's wife to death in the name of Jesus simply because she was sharing the Moslem message in their neighborhood, are you telling me moslems will not do worse than Oyedepo?

We all know Moslem religion is very serious about sacrilege against its faith. I mean this is a religion that issued fatwa against a man for WRITING NEGATIVE STUFF about their religion and Allah! The IMAMS WILL ORDER YOU KILLED! We all know the case of Salman Rushdie where all moslems all over the world were ORDERED by the chief Imam to kill him anywhere they find him for writing a book. Yes, for Writing a book only!

So how dare anyone condemn Bshop Oyedepo for asking Christians to defend themselves and for cursing the criminals parading under the guise of the peaceful moslem religion as Boko haram?

So I STAND WITH BISHOP OYEDEPO on this one. let no one condemn Oyedepo.

Instead let govt assure Christians of safety in their churches.

Let govt fish out the murderers who killed a redeemed pastor's wife and stoned another pastor to death.

Enough is enough! The terror must be balanced.

We won't be cowed and we will not plead with terrorists. They Must burn!

bishop Oyedepo has chosen to step out against the Goliath of religious terrorism and fundamental Islamism and until this govt proves it can protect all religions I am willing to stand with him on balancing this terror. I am not a member of Oyedepo's church. In Nigeria, I am a BETHELITE under Pastor Roselyn Oduyemi . I am not even sure I like everything about the high profile Bishop but on this one, I stand with him.