Embarrassing Tactlessness Displayed By The Governor Of Oyo State 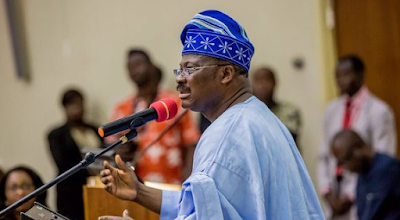 The embarrassing tactlessness displayed by the governor of Oyo State, Senator Ajimobi, while addressing protesting students of Ladoke Akintola University of Technology is a new low in leadership disdain for the governed in the Nigerian political space. However , beyond the expression of anger in the cyberspace in the subliminal reaction to the viral protest video , the electorates are also to blame, as they are complicit in the process culminating in the emergence of crassly insensitive hegemons like Ajimobi.

Most of those roundly condemning the governor’s gaffe never deemed it expedient to do a pre-election interrogation of the system and processes requisite in unravelling the leadership pedigree and credentials of leadership candidates in character, temperament, intellect, and competence. The razzmatazz, frenzies and petty pecuniary gingers would be enough to represent the distracting decoy from the imperatives. Starting from parties’ internal democracy, the people are wont to not asking questions and demanding for the ideal, with the political hierarchies afforded the latitude to perpetually sustain a political selection process that is people’s exclusive.

Whether in the form of handpicking done by god-fathers or the charade of delegated primaries that entrenches the anomaly of delegates’ buying as an acceptable component of the democratic process, the people’s stake is clearly defined as non-existent, with the eventual leadership given the leeway to call bluffs in the event of the inevitable corruption, abuse of office, and unresponsiveness.

Coming to the kernel of the governor’s show of shame, it is mind-boggling that two governors in a region renown as the flagship of educational excellence would find the management of a school ,which they jointly own, a tall-order, to an extent that students would observe an eight months’ stay at home, and such responsibility shirking would not come across as an egregious circumstance sufficient to invoking an impeachment or any other electoral remonstration variant. One is equally baffled at the warped propensity of governors to establish new schools, whether at the tertiary or at the secondary level, in form of the putative ‘model’ schools, when existing educational facilities are in their decrepit state.

The argument that the proliferation of schools ,especially the tertiary ones, in the absence of basic resources based regional development plans and aggressive value-chain optimization strategy of activating the industrialization process which yet recognizes the need for sustainable urban development without compromising the integrity of the rural spaces which have indispensable ecological value, represent growth-poles to enhancing the spatial expansion and development of host settlements, will only hold waters provided that the requirements of the existing schools in quality teachers’ availability and welfare, libraries ,laboratories ,classrooms,hostels,ICT equipment and research funding have been met. Otherwise, we will continue to have shanties sprawl in settlements hosting the institutions ,on account of accruing land values ,with the sad corollary of a dangerous future, as the ill-equipped and run-off –the- mills churned out by the mushroom schools come out exacerbating the country's systemic failure.