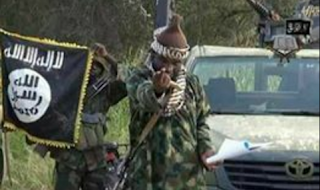 It is not fair that President Buhari is showing off, alone, with Shekau's flag that was presented to him before the world media by no less than Lt Gen Tukur Yusuf Buratai, the army chief of staff himself.

We the people protest. We vigorously demand that we must all participate in this strange official ritual of flag presentation.

Therefore, we ask that the captured flag be mass reproduced as bed sheets for all citizens of the country? This should, very likely, help the army to arrest Shekau. It is not that the army will capture Shekau. No.

It is that the murderous Boko Haram terrorist leader, I am certain, will rather give himself up to be arrested and have his decapitated head presented to Bubu than have millions of bloody kafirs sleep on his sacred flag.
Share on Facebook Share on Twitter Share on Google Plus