This year Shiloh events was different from all other Shiloh events as there was no single advert authorised from the church in respect of the event. 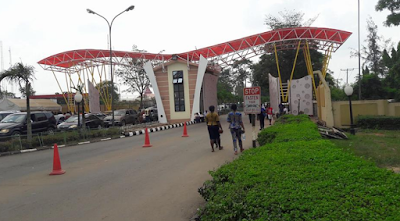 The newly designed Canaanland gate shaped like an Eagle's wings which is usually filled with Shiloh adverts laid bare throughout the event as can be seen in the pictures.
The moves by individuals to post bills over the Internet was also frowned at unusually.
Though a few individually designed bills could still be found on the web. This however did not stop massive attendance and followership online of the event.
During the event, a total of about 7 million hits in 171 countries occurred throughout the 5 days. This is apart from the over 250,000 gathered at Canaanland itself and another 100,000 in viewing centres all over Lagos on each day of the programme. 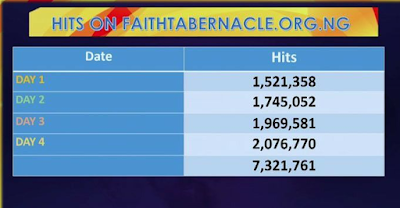 This is also without prejudice to over 6,000 branches in 70 nations all over the world where people gathered or camped throughout the event. On the average, a minimum of 500 gather at the branches while in some cases, numbers of up to 5,000 or much more attend making a total conservative average attendance of about 3.5 million people in churches on each day of the event and between 1.5 and 2 million hits online as shown in the table.
Reason for the low keyed Shiloh was because of the need to address members on steps to avoid the current economic recession which Bishop David Oyedepo has called a holocaust with the warning that things will surely get worse while only those properly positioned will be exempted.
Also prominent during the event was the newly installed 1 billion naira air -conditioner to ease worship for the thousands of worshippers within the Auditorium. 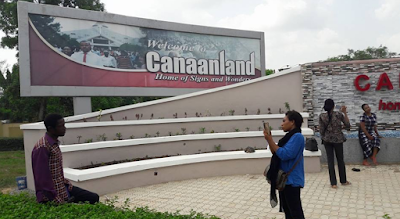 This is the largest air conditioning system ever installed for a church in Africa. Humorously, members who usually had to fan themselves during services complained that the air conditioning system was 'too cold' leading to a reduction in the temperature.
Bishop Oyedepo has announced moves to ensure that the larger Faith Theatre will be completed in good time.
He has also relocated to his new residence 'Mandate House' which overlooks the project site for close supervision of the project while the Executive Vice President, Bishop Abioye now occupies the Bishop's Court.
yedepo also stated that all preliminary aspects of the project such as the road network, drainage system, street lights and other aspects have been completed with construction proper of the 100,000 capacity Theatre as well as the 15,000 housing estate 'Canaan City' beginning in January 2017 for the massive multi billion naira single project (about N500 billion or $1 billion) which may yet be the Living Faith Church and Bishop Oyedepo's biggest ever project.
The Faith Theatre is billed to be the largest church auditorium in the world while the estate will be the largest housing estate in Africa and second in the world.