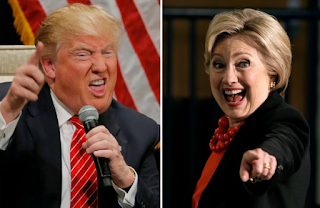 Seriously, i am wondering when will Hillary Clinton, and the tantrumic Democracts, quit their desperate attempt to rob Trump of his victory and simply accept defeat?

First the Demorats demonstrated over 'popular' vote nonsense while conveniently forgetting that ALL the so-called popular vote came from California (Clinton beat Trump in that state by almost 3million votes) but they forgot to mention that California is just one state out of 50, and if removed from the equation,

Trump beat her in the remaining 49 states by over 1,200,000 votes. The Constitution envisaged exactly what happened. The drafters wanted candidates with more geographical spread and NOT local champions of two major cities. Trump won 31 states people. 31 out to 19 for Clinton.

Next, they supported the doomed RECOUNT exercise by the ridiculous Jill Stein which only ended up giving them only one extra vote. Another embarrassment.

Next, they blamed the Russians for Hilary’s loss by ‘hacking their computers’ to expose their filth to WikiLeaks, when everyone agreed the hacking did not affect actual voting and the real voter could care less about whatever hacking was taking place.

Next, they hilariously started pushing for pledged delegates to defect from Trump, and the very biased CNN people (who are yet to apologize to the world about their crooked election projections) convinced the clueless democrats, AGAIN, that could happen.

…. At the end of the day, it was Clinton who LOST MORE PLEDGED DELEGATES in the most embarrassing way (no other candidate in history has had more pledged voters desert them in electoral college that our Mrs Clinton)

Now they are 'appalled' about FBI warrant over the issue of 'Email Gate' and next thing we will hear is that she lost because of that letter.

The Democrats need to wake up and accept that they have LOST this one.

.....Now that they lost, they conveniently, and hypocritically, forgot all that flag-hugging rhetoric and kept coming with insane theories to take away Trump's election victory as if that would ever happen

....Really politicians have an enormous capacity for self-deception. What exactly is Hilary thinking? that they would not disqualify Trump and swear her in because of 'Russian Hacking' or because she scored more votes or because FBI was wrong?