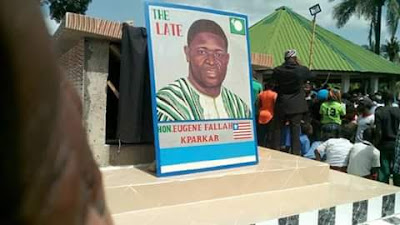 The honor to pay a tribute at the funeral of the Honorable Eugene Fallah Kparkar, for me, is like eulogizing my own son; so close and so special was he to me.


The one regret that grows out of my twelve year relationship with Eugene is that I am not in Liberia to personally read this tribute over the remains of my friend.


But there are no words that I can speak for him; his life spoke it all. Therefore, the eulogies and tributes of the day must be for us the living.

The Kparkar family has lost its head; Liberia, a model of a statesman and for me, a son, a brother, and a friend. But as we mourn his loss, let us contemplate his venerated character, and remember his invaluable services to the Liberty Party and to our country, and lay up the image of his virtues in our hearts.

He was compassionate in his dealings with his fellow man, dedicated and committed in his undertakings, provided and cared for his family, devoted to his friends, but most important, faithful to the people of Foyah.

I recall my first encounter with Eugene in 2004. He had stopped by my office on Benson Street. I had returned to Liberia a year earlier to participate in the Presidential and General Elections, which should have been in held in 2003. Following the introduction and pleasantries, Eugene expressed his interest in running for the House of Representatives, as a Representative Candidate for Foyah District.

As Eugene set out to assure me that he could win the House seat, something clicked between him and me. In my heart I saw a man, young enough to be my son, but possessing the same tenacity and love for country that had caused my return to Liberia a year earlier.

His passing for me is the losing of a friend, from whom I often received unsolicited words of genuine encouragement. He was an example of the exemplary character that Liberia so badly needs today; a man who bore public honors with meekness and dignity. But with all his humility, he knew when to take a stand, when to disagree, and when to disassociate. Men like the Honorable Eugene Fallah Kparkar are no longer available in great numbers.

His love of country, especially for the people of the District of Foyah and Lofa County, was unwavering, his devotion to whatever duty assigned him was unusual, and his sincerity to his friends unsurpassed. He abhorred confusion and misunderstanding; he was the ultimate peacemaker. Eugene has taken his stroll to the Great Beyond. Thus the life of a great Liberian, a faithful public servant, a devout Christian, and a tested friend has ended on this earth. But of him, I say in the words of a poet,

There is no death! The Stars go down
To rise upon some fairer shore;
And bright in heaven’s jeweled crown
They shine for evermore

To Ma Haja, the children, and the rest of the bereaved family, in the words of a Jewish prayer for mourning: may your hearts find a measure of comfort and your souls, the eternal touch of hope.

May the ashes of the Honorable Eugene Fallah Karkar, my son, my brother, and my friend, rest in peace; while his spirit goes to take its station among the great and good people, who preceded him, in the bosom of the eternal love of our Benevolent Heavenly Father!