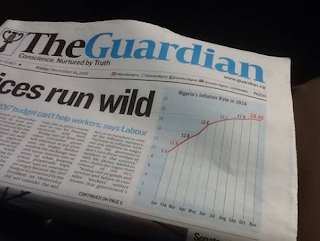 Inflation rate accelerated for the tenth straight month hitting its highest level since October 2005", the Guardian reported under a screaming headline, Prices run wild. Inflation rate at 9.6 in January has practically doubled with the latest figure for November being 18.48.

Everyone is under pressure as salary remains stagnant or cut or lost even as prices of goods and services increasing goes out of reach.

The monster of affordability, tamed in the late 90's due to the pioneering effort of Promasidor with Cowbell Milk with the single serve innovation is back on the block. It is a big concern for businesses as it is for households.

Inflation does not recognize political parties and inflicts hardship, in varying degrees, on everyone. That is the lesson that I hope Nigerians will learn so that we give the economy pride of place and listen intently to what political parties are saying or not saying concerning the economy in the build up to any election.

Truth is we shouldn't be here had we just done the needful and not play politics with our economy.