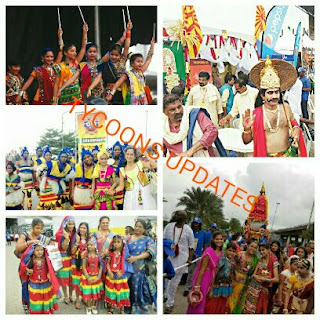 
He was introduced by radio presenter, Mr. Dan Foster and his Indian lady co-compere, there was the usual, ‘ok, let’s wait and see what he’s got!’ It wasn’t helped by the failure of the band to strike up the right tune; that glitch lasted some three unnerving minutes that would have taxed the patience of many an experienced performer. He performed live many of the wave-making songs by Nigeria’s music stars from Don Jazzy to the smallest. In fact, he turned out the star act of the evening,


Indeed, his performance would put some of the original owners of the songs to shame. He did not mime to the songs, as is often the case with most of these Nigerian musicians, who can’t perform their own songs without miming to a CD; he performed them live, with the band on stage giving him the right instrumental feel that lent him his cue.


The Indian boy, confessed his love for Nigerian music, and went on to boldly give vocal and performance credence to it. And was energised by the warm response his Nigerian audience gave him. Obviously awed by the Indian wonder boy who could easily have passed for a Davido, who failed to turn up for the show anyway, or Don Jazzy, or D’Banj or Kiss Daniel or 2face, the audience rewarded him with equal dance zeal and appreciation, as it rocked away to an Indian boy, who was clearly more Nigerian than would have been expected. And there were music and performances from Bengali, Gujarat, Uttar Pradesh, Madhya Pradesh to Rajasthan. The dances ranged from traditional to classical and were typical of Indian dances.

The festival Indians in Nigeria now have a moment in the cultural calendar to always look forward to. Indian-Lagos,was made possible by Mr. Bolaji Rosiji-inspired Gaurapad Charities and other supporting brands,