Home / local / The Girl In The Picture Has Gone Viral! By Oliver C. Orji

The Girl In The Picture Has Gone Viral! By Oliver C. Orji

The girl in the picture has gone viral , but for the wrong reasons, unfortunately . The first picture has been misconstrued and I hope to address the misconstruction shortly (Even though I heard GTBank has issued a disclaimer). 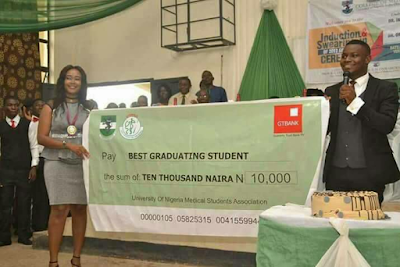 In the history of the University of Nigeria medical school, no student has arguably monopolized an induction ceremony the way Chidimma Ikekpeazu did on August 7, 2017 at the UNCOMA Hall, UNTH Ituku-Ozala. You can take it to the bank because I was an eye-witness!
Perhaps the story of the young beautiful doctor in the picture will inspire a few people.
Chidimma was admitted into the UNN to study Medical Rehabilitation because she did not make the cut for medicine and surgery. I remember a conversation I had with her and her mum, Dr. Ebele Ikekpeazu in 2012 when she was in her second year. The young student had her mind set on becoming a medical doctor and not a physiotherapist. I thought she probably needed a little encouragement to stay on a course which had great prospects and which was still developing in Nigeria. But she wanted to change to medicine by all means.
Thankfully, later that year, owing to her excellent results in first year, she transferred to medicine and would go on to become the best ever female student in the second MBBS , with three distinctions in Anatomy , Physiology and Biochemistry.
I had spotted her genius when she was preparing for the exams. The mum had asked me to help out with private lessons on medical biochemistry , but after the first chat with her , I declared that this one did not need extra help. She was good to go.
In her third MB, she made another distinction in Pharmacology and was just 2 marks away from a distinction in Pathology.
In her fourth MB, she made a distinction in Commed and Obs & Gynae.
In her final MB, she made another distinction in Medicine and was the best student in Surgery.
So, during the award section of the induction ceremony which was indeed a solemn and unforgettable affair for the new doctors, Dr. Ikekpeazu made sure that her name was plastered on the brain of every guest in the hall. For Arch. and Dr (Mrs.) Ikekpeazu, the parents of the young girl, it must have been the proudest day of their lives.
Dr. Ikekpeazu scooped more than 96% of all the awards on the occasion:
-Award for the best female graduate (with a cash prize)
-Award for the overall best student (with a cash prize)
-NMA (Enugu) award for the best student (with a cash prize)
-Award for the best student in Anatomy
-Award for the best student in Physiology
-Award for the best student in Biochemistry
-Award for the best student in Pharmacology
-Award for the best student in Community medicine
-Award for the best student in Obs and Gynae
-Award for the best student in Surgery
-Distinction award in Anatomy
-Distinction award in Physiology
-Distinction award in Biochemistry
-Distinction award in Pharmacology
-Distinction award in Commed
-Distinction award in Obs and Gynae
-Distinction award for Medicine
- UNMSA award for best graduating student
I have taken the time to list the awards because they were called individually and Dr. Chidimma Ikekpeazu was moving up and down the stage like a pendulum. If you were tired of reading the list, imagine the atmosphere in the hall. Some people wondered if the induction was now an Ikekpeazu affair and if she was the only one in a class of over 100 (You may choose to laugh)!
Such was her genius that out of the whole awards given on the day she missed only two- Best student in Paedo and best student in Pathology!
She left the hall with cheques worth hundreds of thousands of Naira, including the #10,000 that has now gone viral.
For the records, the #10000 in the banner was a token by the UNMSA, a student body of medicine/surgery in Enugu campus. It is a dummy cheque of the GTBank that was on display. It was not a cheque given by GTBank. Evidently, the world wants more recognition and bigger awards for exceptional academic achievers in the ilk of Dr. Ikekpeazu, and it is totally acceptable!
Finally, Dr. Chidimma Ikekpeazu deserves all the publicity she's getting for her outstanding academic excellence . Perhaps JAMB should be scrapped afterall. The best ever female medical graduate in UNN initially missed out on medicine because of a couple of scores in the UTME.
The publicity the lady has garnered should alert philanthropists and educationists that a medical genius is born. This one is a high-flyer and must be encouraged to soar beyond the skies. Tell it to the world!
Congratulations, Dr. Chidimma Ikepeazu!
Share on Facebook Share on Twitter Share on Google Plus