NIGERIAN YOUTHS URGED TO USE TALENTS FOR NATIONAL UNITY! BY SENATOR BABAFEMI OJUDU

The Buhari administration will encourage young people with viable ideas including those who apply their gifts and talents to promote the unity of the Nigerian nation, according to Mr. Laolu Akande, Spokesperson to the Acting President. 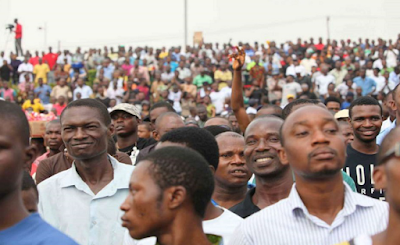 Mr. Akande stated this on Friday when he received a Nigerian International Classical Artiste based in the United States, Abiodun Koya, in his office.
Miss Koya was on a courtesy call to the office of the acting president and to present a new song, “Lift Up Nigeria,” composed towards the celebration of Nigeria’s 57th Independence Day anniversary on October

1, this year.
“The acting president has said over and over again that it is important that we should continue to project especially to the youth of this country that we are better living together,” Akande said, stressing that “the strength of Nigeria is in its diversity.”
Akande said it was because of this that the Office of the Presidency will support Koya to promote the song, especially because it was geared towards the celebration of Nigeria’s independence anniversary.

He said: “Whatever we can do, as a government, to support causes like yours we will be willing to do it. And we encourage young Nigerians; we encourage talented Nigerians; we encourage artistes, anyone using their skills, using their talents to advance Nigeria’s unity. It is what is right and it is what is going to benefit each and every one of us. Regardless of our differences whether it is in language, or it is in ethnic background or religion, Nigeria brings us together and we are bigger together.”
In her response, Miss Koya, who has been living in the United States for 18 years, said she hoped that her song would give Nigerians hope.

She said: “The song, ‘Lift up Nigeria’ is for our great country; it’s for everybody. I’d like to say this: this song is divine. It was given to me by God. It may sound cliché but it is. It is just for a time like this and I really, really do hope that the song can turn hearts and give Nigerians lot more hope. We really need to lift Nigeria up with our voices.”

She said: “We are better united. The beauty of Nigeria is in the diversity. So, let’s come together and love ourselves and be grateful that we have such a great and powerful country, the giant of Africa. We are the giant of Africa, we are the trend setters in everything, fashion, business, politics. Whatever it is, they look up to us.”
Koya said her success as an international classical artiste is traced to her Nigerian cultural background.

She said despite travelling to many countries of the world, she is still moored to her cultural backgrounds in Nigeria, which have had great impact on her act.
She said: “A lot of people think that I have been successful as a classical artiste because of my talents but they don’t know that talent is different. Talent is separate. It is the culture, it’s your mentality, sort of your approach to life that makes you successful. And I want to seize this opportunity to say that it is the Nigerian culture in me that enable me to forge ahead and be ahead of my colleagues globally in terms of classical music and whatever I lay my hand to do.”
According to her it was the culture, the home training, the food that makes Nigeria the great country it is.

She said she has continued to project the Nigerian culture everywhere she goes and in everything she does, and has, for the past four years, worn the Nigerian indigenous fabric, the ‘ankara’ in all her classical music performances.

Abiodun Koya an Opera Singer, Actress, Poet and Screenwriter has sung around the world for numerous world leaders including Presidents, Kings & Queens, Ambassadors and Members of the US Congress. She is the only Nigerian to date to have sung for two consecutive American Presidents at the White House.