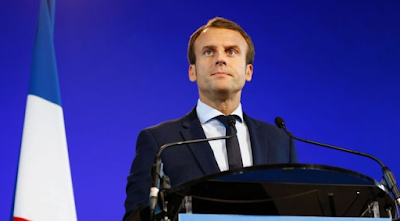 It is like an armed robber blaming his victim for remaining poor.
-------------/--//
I would have directed him to the Berlin conference of 1885 where his ancestors sat at a table and used pencil and ruler to draw boundaries without any thought for the peculiarities of the inhabitants.
But I am not one who lives in the past.
---------///
I would have directed him to the brutal colonial legacies of France, which though no less evil than the British and Belgian counterparts, was much more barbaric if we considered the great Algerian question in the 60s.
Again, that is in the past.
---------------
However, under Macron TODAY
France still meddles in the domestic affairs of Franco-phone countries in a way (including projecting millitary might) the other former colonialist nations would not even dare.
Compelling ALL francophone African nations to deposit 50% of their foreign reserves in the French Central Bank is a form of slavery that is certain to create and perpetuate civilisation problems.
----/----
Macron has no institutional moral standing to pontificate over a problem his nation caused, and for which he refuses to acknowledge.
Let those who "agree" with him at least acquaint themselves of this historical perspective.
Share on Facebook Share on Twitter Share on Google Plus