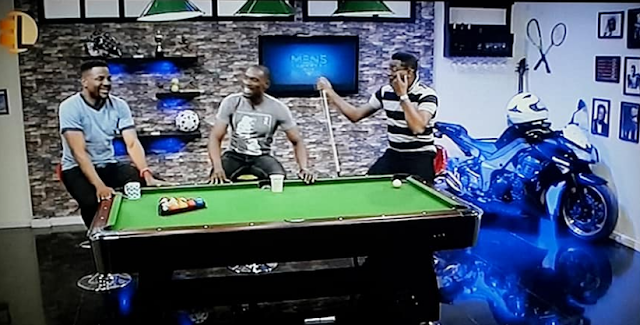 Can I just say that I love this show? Again.

And if you know me well, you know I have nothing for metro men, for lack of a better term. Not that I think these men are vain.

Ebuka is still one of the realest persons on the face of the earth, Andre doesn't give a hoot, and Mazino is comfortable in his skin... but they are upper class men, and there's a single story about upper class men. It is the "Lekki" story.

A terrible thing to place someone like Ebuka in the same sentence as a Teebillz or a Maje... but yea, the single story haunts a group of men of a certain style.

So I would NEVER have thought I could stand to listen continually to what they'd have to say. I would imagine a lot of candyfloss masquerading as smarts. But not with these guys. Their wit and honesty is pure som'tin.

And their friendship. The affection they have for one another. Bless.

I don't watch TV except I'm sure someone's going to die (aka Crime & Investigation)... but it is always a pleasure to run into these guys.