BUHARI, ATIKU, AND MILLIONS OF PEOPLE! BY IMMANUEL JAMES 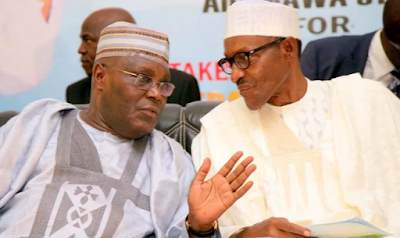 With all his foibles, Mohammadu Buhari deserves commendation for his honesty. The man's honest ad-libbing and actions contradict the script of lies assembled to his service—to the shame of his idolaters, and to the eternal gratitude of truly patriotic Nigerians.

For the most part, I have since moved beyond him, looking up to 2019—to yet another change. That hope, it seems, may be illusory, seeing as only Atiku Abubakar has come boldly forward to offer service. Less than two years to an election, a nation has no idea or critical knowledge of alternatives.

Like the typical Nigerian politician, Abubakar is saying all the sweet things. Words can assist our effort to form sound opinions about people, but actions and the choices people make are better ventilations into the workings of their minds.

There are allegations of corruption, technically unproven at least. With an electoral structure that ensures you need corruption to win the presidency, we can put our graft suspicions of Abubakar in brackets. Yet Abubakar offends me for the small reason that he has over 30 children. Right there, ladies and gentlemen, beyond words, is the man's honest illustration, a window to how his mind works. You need a certain dint of irresponsibility to think that, just because you have money and access to women, you can screw out a village.

I admit, my anger comes from a place of bias. I love space. I am incompatible with any forms of congestion—crowded homes, piles of anything, crowded nations. I have for long been harping on the need to halt Nigeria's unwieldy human surge.

The Kenyan government, for instance, has been active in its population control policy. "Have as many children as you can cater for", once said a mantra. To which Kenya retorts, "Have as many children as the government can take care of". Because you are not going to build your own roads and hospitals and airports and schools and police no matter how rich. You NEED to be responsible as a member of society, no less as a leader. It is not just about you and your pocket, but in these parts we are yet to start thinking like that. Never mind how much we cherish the order and sanity in the countries we visit, where human beings think like that.

Which leads me to the issue of census politics in Nigeria. Regions and states battle to own the largest census figures because we run a primitive idea of governance. In our formula for revenue sharing, we consider population. We consider numbers, not their productivity! How do you deserve more revenue simply because you have more people—more children so to speak, who produce nothing to match their size? How is that not insane?

A large population isn't intrinsically great, forget the argument about a large market. A huge market without crucial productivity will be a dumping ground of imports from serious nations, with the possible result of a weakened currency. Israel is an important country, has a strong market, has sterling infrastructure, strong military, name it! It is a little above 8 million people, yet on the Human Development Index, it is 16th in the world. Nigeria, with over 170 million people, is 152nd. We need a leader who thinks from the base, well enough to realize how small values shape a nation into a big idea.

Abubakar doesn't seem to know that these things matter and are at the root of our problems. They tell of a man's mind and philosophy, his notions of the world and society, unraveling people better than can words couched by paid artists. In our hope to outlive Buhari, we must begin to look for candidates and start campaigning from now. KOWA party has disappeared, to reappear in 2019 as political paramedics to address an electoral emergency. We must rely on the transparency of action, choice and lifestyle to deconstruct the integrity of candidates. We must learn from Buhari. Time is going.
Share on Facebook Share on Twitter Share on Google Plus