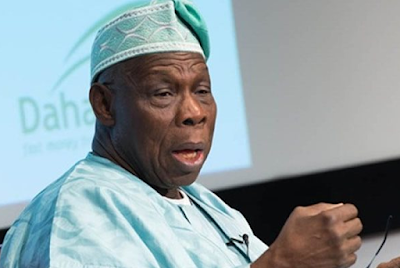 A long 19 years after he was released from Yola Prison, where he was jailed for allegedly planning a coup against late General Sani Abacha, former military head of state, former civilian President, ex-army general and the Ebora of Owu, Chief Olusegun Obasanjo, who no longer wants to be called Matthew, the Christian English name with which he was baptized, has revealed that he was so stone broke after his release from prison in 1998 that he could not pay his children's tuition in their schools.

He also divulged that Ted Turner, the American billionaire founder of the CNN and Ford Foundation, the American multi-billion dollar charity institution with global reach and mission of advancing human welfare rescued him from penury with a combined cash gift of $150,000.

The Ebora opened up these juicy and amazing tit-bits of his after-prison life, this week, at a meeting of the Christ The Redeemer's Friends International, a group of the Redeemed Christian Church of God (RCCG).

He added that he was surprised that the federal government headed then by General Abdulsalami Abubakar (rtd) who released him, put at his behest, two cars with pilots to take him from Yola prison to his home in Abeokuta as well as a presidential jet to visit the United States of America where he met former US President, Jimmy Carter, Turner and executives of Ford Foundation, on which board of trustees he was the sole African member.

All of these experiences are nothing short of the miraculous. Not long after his release, I was, as a reporter, at his Abeokuta Ota Farm home, and I still remember the gaunt, ghostly figure of the otherwise portly, near Buddha like Obasanjo, before he was jailed. He retained his earthy jocularity among swarming power brokers and friends that then turned Ota Farms into some sort of Mecca. Word was out on the streets that the men holding the country by the scruff of the neck had deemed that the Ebora would be the next President of Nigeria. He was needed, it was reasoned, as a unifying President for a country tearing at the seams, being a Yoruba man acceptable to the North and not an enemy of the South East and South South either. This came to pass in 1999 at the expense of Dr Alex Ekwueme. But that is another story.

However, it would, indeed, be interesting to know if the federal government that set him free from prison and afforded him cars and presidential jet, did nothing to beef up his empty pockets. Could not General Abdulsalami and the other ex-generals who invested vast political muscle and overflowing chests of campaign funds for his presidential election, had helped him out with the small matter of his children's tuition fees?

It would also be, indeed, interesting to know what the penury besieged Obasanjo of 1998 is, today, in personal net worth value. With military contracts, NEPA prepaid meters production, massive farms across Nigeria among many other lucrative enterprises, the Ebora of Ewu must now be a very comfortable multi billionaire in dollar terms. An exaggeration? Maybe. But know that God must indeed love he who no longer wants to be known as Matthew the tax collector but is Christian enough to recall, among the brethren, God's merciful blessings at the lowest point of his life. Perhaps the next stories he would tell is how he has used the great divine gifts of long life and prosperity in charity to lift the horrendous poverty in which so many millions wallow, in this country which he had 11 long years to manage as head of state.