Home / international / Tayvon Is In Jail For Robbery And Attempted Murder

Tayvon Is In Jail For Robbery And Attempted Murder

Tayvon is in jail for robbery and attempted murder. 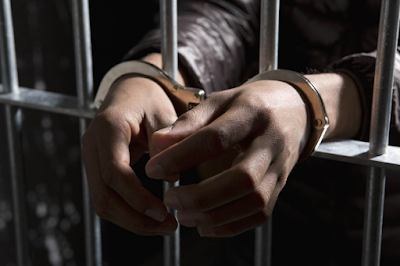 He is part of one of the most notorious gangs in the hood; gang related issues have had him in jail a few times, so he is quite comfortable here.

He starts an affair with a Correctional Officer, let's call her Keisha.

He starts a second relationship with another Correctional officer, let's call her Tasha.

It doesn't take long before he woos a third correctional officer; let's call her Shaquila.

Then a fourth Correctional officer catches his eyes, and a relationship begins.

For Tayvon, this is not love (of course). He needs to run gang-related businesses from his cell; these women make it oh-so easy for him and his needs.

So this criminal gets regular sex, hot meals (cooked by these women), ironed uniforms, blankets and contraband goods, drugs, alcohol, and mobile phones smuggled into his cell; courtesy of his correctional lovers- women who should uphold the law (unbeknownst to their male colleagues).

These women claim to be in love. But what is most shocking is none of them knew the other was dating Tayvon, yet they work in the same office and fuck him in the same cell.

Didn't one smell the other's fragrance at anytime on this jailbird? Or do women just like to pretend all is well?

They all get pregnant by this criminal, still the conversation never happened between these women working in the same office. If it was a movie we would agree it is a shitty unrealistic potrayal of women. But this is real crime stories!

It took the second pregnancy of Tasha before she realised Tayvon was responsible for Shaquila's pregnancy.

For years these women fed this criminal, smuggled drugs into prison for his sake, assisted him in running his criminal businesses and risking their own jobs and lives at the same time.

Before his second year in prison, he had 5 children from correctional officers!!!

And when they all found out what was going on, they didn't fight the man or allow for introspection, they fought one another!

This is real life crime stories, not some twisted debauchery from Woody Allen's imagination.

It says a lot about women. How can you work in the same office for two years and you didn't know that the guy next door you've been having sex with is also having it with 3 of your colleagues at the same time? Getting y'all pregnant?! How?

No, he is not slick. YOU are dumb.

This is a criminal with no education. But YOU have some training, some education, and you are an officer; yet you risk your job and your life just because "you like the way he makes you feel"?

Our entire lives as women and all the avoidable mistakes we make are hinged on words. What a man said to you, and how it made you feel; and all the sacrifices you make just for words said.

What about opening your eyes to see that the man promising you forever is a bloody jailbird with no future ahead of him.

Tayvon has no skills. He is not a lawyer who got angry and shot someone. He is not an engineer who made a bad decision and ended up in jail. No. He is a crackedhead gang member who has done nothing all his life except sell ecstacy. How then can officers be keeping relationships with him and recounting the nice things he says to them (from a cold cell) to mean anything?

Can we please not raise our children this way anymore? To wait on the validation of others? Can we just accept that we are beautiful or ugly and not give that power to anyone to make us feel special or hurt?

-Because I think that is where all the problem stem from. Women want validation desperately, even if it is coming from someone beneath every layer of acclaim or deference.

Women in bad relationhsips having a tell-all confession with "My dear hubby" as a starter pack on how-not-to-love-again with a picture of a bleeding nose and blood drenched handkerchief as evidence of domestic violence is quite boring.

Why does this continue to reoccur? You are all getting pregnant in the same office by the same jailbird and none of you are aware of this. Toffee-nosed yet dumb. It's the same principle we apply to domestic violence. It seems every woman wants to record her own pain, ignoring all the signs right before her eyes.

Is it not here on Facebook that one married Akwa Ibom man was dating over 10 women???

These things don't happen to men. Why? Men do not give their power to anyone. They own it. They have authority over their own lives.

It is almost impossible for 4 male correctional officers in the same office to date one female prisoner and none would be aware of the other. Impossible!

On the other hand, the favourite pastime for women is finding someone, a man, who can have absolute authority over her.

There's got to be a time when we can drive zero sense out of our lives the moment nonsense shows it has no sense.

Can I add that these correctional madams are all African American?