Home / local / Nigerian Youth Are Being Ridiculed By Older Nigerians

Nigerian Youth Are Being Ridiculed By Older Nigerians 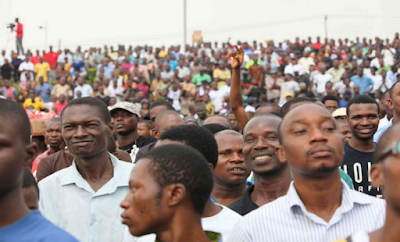 Again, Nigerian youth are being ridiculed by older Nigerians, for being on social media parroting in political irrelevance, while their 39-year-old counterpart has become the president of France. "Gowon was president at 32; Buhari was head of state at 40; Murtala Mohammed at 26," they say. Very well, but the truth is not complete.

The generation before was mostly agrarian with little or no formal education, so it could not step in. The post-colonial breed merely leisurely walked into official positions, some plucked from WASSCE exam halls and made directors of government parastatals.

Many were sent abroad for study. There was absolutely nothing inspiring about that generation: it defecated upon sterling colonial legacies, left little private-sector footprints, and plunged the nation into a civil war in six years. Today's youth are reaching milestones in small and medium-scale enterprises, in IT, in many important sectors in the private sector at least. Not as impressive, but that is something.

One might concede that said generation really worked hard to develop no national ethos; worked hard to ambitiously die abroad from obesity from corrupt enrichment; worked hard to convert a potentially promising young nation into a heap of socio-economic refuse. You might think that I'm exaggerating; don't even move out of your room to find the evidence outside. Just go to your electric switch right there on your wall and press "on". Do you know that between 1988 and 2017, we have spent over $30 billion dollars to prevent that darkness you're using your phone torchlight to clear?

The Nigerian youth can rise to the Marcron example, but in subsequent generations. At what age did you make your first million as a young man? How many youth can boast of a billion Naira, and through what livelihood? Alright, alright, I have my kpangolo under my bed. And I'm slipping into it Naira notes saved from my monthly salary, so I can contest against Rochas Okorocha's candidate in Imo State guber in 2019. Vote for me!