Melaye Vs Buhari: A tale of two classic absurdities

He without sin should cast the first stone. 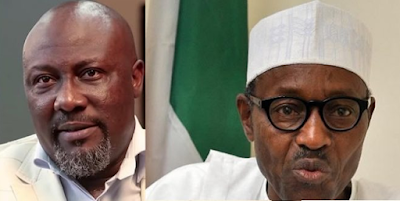 Nigeria's media space over the last one week have been thrown into a state of wild frenzy on controversies bordering on alleged forged certificates of one of Nigeria's fearless and controversial distinguished Senator, Dino Melaye, representing Kogi West at the National Assembly.

This prolonged argument whether or not the embattled Senator Dino is rightfully in possession of a valid B.A certificate in Geography from Ahmadu Bello University, as claimed, is still a debate several public affects analyst and politics observers are still finding hard to solve. Some are calling for his head while some of his supporters are strongly of the opinion that Dino will come out unscathed.

Trust me, Dino is not new to controversies and he may count on his many years of experiences as a one - man-squadron, a technical knock out tool against his many detractors.

Though this allegations of certificate forgery hanging over his head calls for serious investigation because of the several contradictory circumstances surrounding it but unfortunately, the same shallow, silly and illogical response put up by blind defenders of Buhari during his WAEC result scandal would also be deployed here. After all what is sauce for goose is equally a sauce for gander.

Buhari claimed to have a WAEC result but when he was asked to present it, hell was let loose and when he manage to present one, lo and behold, it was blunder upon contradiction, upon more controversy, upon blunder!

Muhammadu Buhari presented certificate bearing the name, 'Mohammed Buhari'. If you still believe there's no difference between these two names, then I suspect your claim that, you reading this went to school. Consult a lawyer or a stock broker to tell you more.

The most embarrassing and unforgivable shocker that even left most of Buhari's defenders stupid and speechless was when his WAEC certificate indicated that he had C5 in Hausa language, forgetting that Hausa language was not being offered, not until 8 years later , contrary to what our beloved self acclaimed Mr anti Kwaraption earlier claimed!

Don't you think the call for Dino Melaye's head a misplaced one, following the similar circumstance that surrounded Buhari WAEC result scandal?