Home / confession / A Girl Turned Down Ibadan Boy Love Advances, After Spending On Her! Read And See What Happened Here

A Girl Turned Down Ibadan Boy Love Advances, After Spending On Her! Read And See What Happened Here

tycoonsupdates 22:18:00 confession Edit
: And He Heads To Twitter To Call Her Hungry Ass Bitch 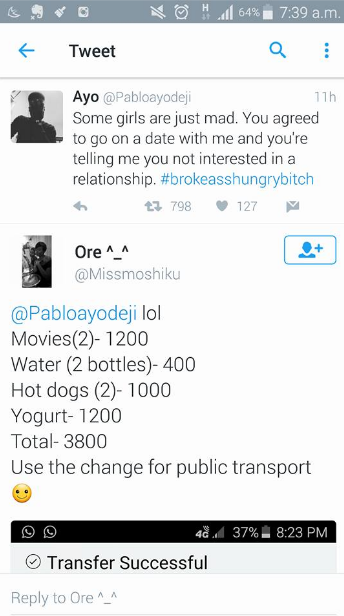 Ibadan boy is on a date with a girl. Girl tells Ibadan boy, after date, (that) she isn't interested in a relationship. Ibadan boy heads to twitter to call her hungry ass bitch for chopping his money yet turning down his love advances.

Girl tweets proof of payment and says nothing afterwards.

Dude has a Snapchat flower halo on his profile picture. Girl is on a date with her girlfriend on hers, looking quite the chic.

A boy with no discretion. Zero sophistication or logic. Unable to discern sarcasm hurled at him on twitter. Baking his humiliation under the vehemence and excitement of Twitter Nigeria.

And you wonder: how in hell did they end up together? Even for one lousy date? What did they have to say to each other, as it is clear their wits are by no means chums.

A shallow boy. Disgracing the Guy Code of relationship. Yet clueless. Sitting in the centre of a war, hoping to explain his scars to dead bodies.

And a girl. Oh what a girl. Serves him a bowl of triumph. And a tip. Without another word uttered. Walks away.

We need to pay attention to boys.

United Nations have a year-long agenda for women. Women have days to celebrate their womanhood. The girl child is the world's sweetheart. There are closed door meetings to prepare the girl child for the future.

Boys have been left behind to pay for the privileges bestowed on their gender. Sometimes it feels like they are paying for the entitlements their fathers enjoyed.

We are not educating boys. Gender balance isn't quite what is being practised. There's an overwhelming absorption in the affairs of the girl child, and a neglect of the needs of the boy child.

It is when they go on dates that we realise the wide gap that exist between the sexes.

Girls have been schooled a thousand times about relationship. Nobody tells a boy anything.

He is expected to grow up thanking his stars he was born with a penis... as if that penis contains all the knowledge he'll need moving through life.

I have never heard of an event organised for young men; apart from church seminars which really don't count since they'd have to turn through pages of misogyny in the scriptures to buttress what they already know: "I am a man."

Well, here we are.

A boy thinks a date is an automatic ticket to start a relationship. He is pissed and he wants his money back.

But you see, he doesn't know what the girl knows. Nobody pays attention to the IQ of boys (until it is time for him to be financially stable, then we expect wisdom to drop from heaven to guide him).

Last year, a boy bragged about manipulation and rape on Instagram.

If we continue to prepare the girl child for the future and leave the boy child to pick up common sense from rail tracks, we should get ready for treacherous days. 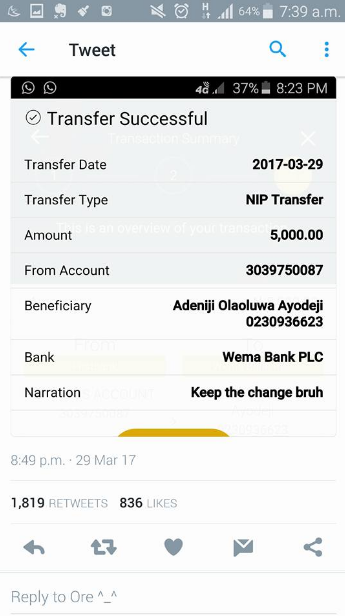