Home / local / President Buhari To Step Down For Osinbanjo

President Buhari To Step Down For Osinbanjo 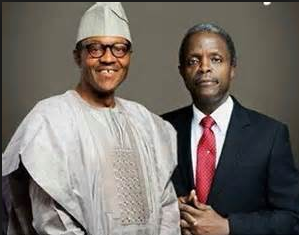 Is It Time For Ailing President Buhari To Step Down For Osinbanjo to take over? He seemed to be doing a good job as far as I can see!

I know that despite disenchantment with some goings on in the Buhari Govt, many Nigerians, including myself, probably still think fondly of our old Baba but maybe it's time we start considering the possibility that our general cannot lead the 'war' anymore and start thinking about 'drafting' Acting President OSINBANJO into the permanent position as our new General in the Change Army.

From what I can personally see, it's possible acting president OSINBANJO has a deeper understanding of our issues as a nation than most people, myself included, have been giving him credit for. He is calm, a deep thinker and I suspect he is cannier than what his demurring exterior would suggest (he is after all a graduate of the Jagaban political school. Lol.)

I have looked at some moves he has made in the last couple of weeks and I must say I am impressed at the sagacity he has displayed without fanfare. Consider the refreshing way he engaged demonstrators even when police would rather cancel or jail the leaders of the protest; Look at his smooth engagement and visit to the restive militant region and finally his swift handling of the NCAA mess as examples

Nigerians, maybe our Moses is not going to come back from the London mountain one more time to lead us and it may be time for a Joshua to move us forward.......just thinking aloud people. This has been a tough ride so far. What do you think?