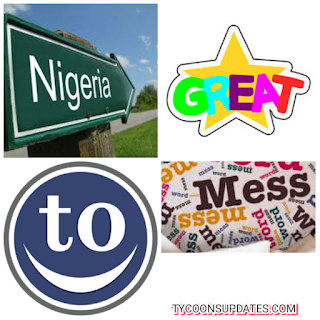 I grew up to see bustling and prosperous ports in Sapele, Koko, Warri, Burutu, Port Harcourt and Calabar. What happened to those ports and the huge businesses and massive jobs they provided? Dead or a pale shadow of what they were in the pre 1967 era.

I grew up to see the bustling coal mines under the Nigerian Coal Corporation, the huge palm plantations with palm oil and kernels for export in eastern Nigeria and the industrial estates which employed millions of Nigerians and generated millions in foreign exchange. What happened to the coal mines and the coals for generating electricity and the palm plantations? Where are they?

And many more I cannot even recall. What happened to my country? What happened to all these centers of production? Why are over 100 million Nigerians living below the poverty line today? Why are over 50 million able bodied people unemployed and underemployed today? Why has the Nigerian currency crashed from $2/N1 to now N500/$1? Why have government appointments and politics, which produce nothing, not service, not products, become the most lucrative businesses in the country while farmers wallow in abject poverty? Why can't keys roads in the country like the single artery of road leading from Lagos through Ore to Benin ever be completed or well done for decades until today?

The answer is simple. All who have led Nigeria from 1967 including those leading the country today are a curse on this country. They are locusts who eat away the fat of the land. They are jackals who discovered easy free money from oil and deliberately murdered the mainstays of an otherwise prosperous country.

They remain in power and like cancer, they eat up values, quality, standards and destroy the economy, health system, education, industry, electricity, the currency and most importantly, common sense.

They introduced a unitary system of government that greedily confers national revenues on them in the political centre which allows them to play Santa Claus redistributing monies they did not produce nor earn.

Thereby amassing and consolidating political and economic power. In ruthless greed, they plunder the commonwealth and refuse to restructure the country back to the prosperous true federalism of pre-military incursion into political rule in 1967. Their destruction of the country is inexorable.

There is another reason. Perhaps the most germane reason. The Nigerian peoples turned rogue as well. It became and remains "smart" to get contracts and not execute them.

They lost decency and integrity and ignored the land and the crops and the industries for unearned armed robber deals or political appointments.

They cheat and pay for their children to pass examinations and bribe to get them into universities. Men have lost their manhood and are unable to challenge the political thieves prancing about with stolen monies. Editors and reporters have turned blackmail into an art and their pages into unsigned advertorials.

They have lost the chutzpah and professionalism to help build a God fearing, integrity driven prosperous nation.

They joined in the rat race of amassing wealth. And all the rogues in the land get garlanded with chieftaincy titles, military generalship, national awards and other dubious honours.
Nigeria is a mess