Home / local / BUHARI: Level Of Poverty In Nigeria Upsets Me! By Ken Tadaferua

BUHARI: Level Of Poverty In Nigeria Upsets Me! By Ken Tadaferua 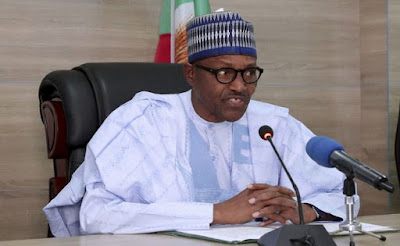 An amazing statement from the President after 76 years in life. I never thought I would hear Buhari mention the word: POVERTY. Correct me if I am wrong. I know of his anti corruption public flares. But not poverty despite its huge impact on our people. Some may assume that his anti corruption stance is to deal with poverty. That is probably not true. He wants to keep things right. Not necessarily prosperous.

It is also an irony. That President Muhammadu Buhari announced he is upset over ravaging poverty in the country while serving a most sumptuous breaking Ramadan fast with Vice President Yemi Osinbajo, members of his cabinet, Heads of Federal Departments and Agencies at the Presidential Villa, Abuja.

In spite of Buhari’s supposed pain over poverty, you can be assured that the galaxy of power men at the Villa’s vast breakfast table did not shove away their rich filled plates in solidarity with the millions of their many poor citizens who could not afford food that day.

It is an irony indeed. That President Buhari supposedly 76 years is only now just talking about the rampaging poverty in Nigeria. This man was former governor of Borno and North Eastern State, former petroleum minister, former military head of state and today, civilian President. But the word poverty only managed to escape his lips only after all this his gilded life.

It is an irony indeed. That President Buhari was born and raised in Kastina State, which has been and is still today, one of the country’s poorest states with over 75 percent poverty rate. But Buhari had lived well off the free fats of the land as “government pikin” as soldier, governor, minister and head of state. Still his state and his country grinds into worse poverty while he now just announces after 76 years that he is upset about poverty.

The great irony of his announcement is not wailing over the 100 million citizens or the more than half of Nigerian total population in dire poverty but it is essentially to praise his government for its poverty alleviation programmes: TraderMoni and School Feeding Programmes which Vice President Osinbajo is hard marketing.

As with all powerful Nigerian leaders, the use of poverty alleviation programmes are often self-serving political propaganda to achieve populism than to put an end to the nation’s harrowing poverty. From Obasanjo in the 1970s, through Ibrahim Babandiga, Sani Abacha, Goodluck Jonathan to Muhammadu Buhari today, the half hearted, unsustained, poverty alleviation efforts have turned out failures.

Ranging from Green Revolution, DFRRI, Better Life for Rural Women, Family Support Programmes in Nigeria, Poverty Alleviation Programme, Youth Empowerment Schemes, National Poverty Eradication Programme (NAPEP) and so very many others on which billions were burnt but poverty got worse. For many reasons.

Many of the projects lack the national vision, mission, strategy, technical depth and long term planning to deal with the national humongous poverty. The votes, consequently, for the projects are often too little, too glamorized to meet the real issues and is often a political joke. The funds are used instead to drive political propaganda, to patronize party faithfuls and achieve empty populism.

While Buhari, Osinbajo like others before them flounce all over the country talking up TraderMoni, the huge silent suffering poor masses remain mute with no hope.
TraderMoni is a microcredit programme to deliver interest free capital to micro enterprises as traders, farmers, artisans through their phones, without initial requirement of BVN or bank accounts.

All of these sounds well. But of over 100 million citizens in poverty, in villages, hamlets, slums etc what impact will TraderMoni have in dealing with poverty? There is a recent report that over N15 billion has been so far disbursed to over 1.5 million petty traders under the government’s TraderMoni loan initiative nationwide.

Assuming that this report is true what about the 98.5 million citizens without TraderMoni? Lots of propaganda will continue about the so called N15 billion and 1.5 million petty traders but it really is just a joke.

This has always been the attitude of our leadership to worsening poverty. A lack of concern. As I said, our leaders use the programmes as tools of propaganda not as attempt pull the poor off the bottom of the development ladder. The programmes are to support and patronize party faithfuls building them to cult worship than to truly strategize poverty out of Nigeria and introduce prosperity.

While Buhari’s government is talking about N15 billion given as TraderMoni, a research company, BudgIT reports that some N10 trillion was spent on fuel subsidy from 2006 to 2018. However, the IMF says no less than $5.2 trillion has been spent on fuel subsidies and the other consequences thereof in Nigeria from 2015.

It is interesting that Nigerian leaders and governments are busy boasting about spending billions on poverty, but they same pump trillions into fuel subsidies payments, the same reason corruption and poverty are worsening.

Buhari can wail all he wants over poverty. It will be quite a laugh that after 76 years he now says he drives and sees poverty on the streets. We know he likes to sound off about anti corruption war. But when it comes to poverty, that is not him. He is not bothered by poverty. Like his predecessors, poverty means little to him.

It is cultural to have the poor, so it is not new. Let him not tell us that his TraderMoni will alleviate poverty. It will not. Let’s simply accept that poverty will only get worse. For there is no vision, no long term strategy, no national plan. No freebies for a few faithfuls. Nigerians want to produce and earn their due. Get this country into mass production with foreign markets in view. It can be done.