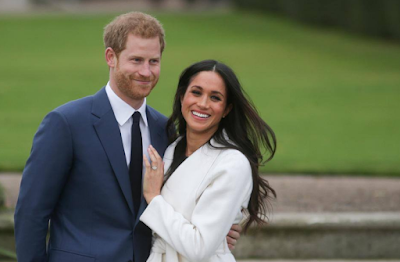 It shows that we accept we are inferior in some ways.

And in many unspoken ways, we are glad that Meghan’s “blackness” is not black-black – like an embarrassing hue that we would be too ashamed to identify with because then it will truly be black, like a stain that needs to be wiped out. Our joy seems to be a thank-you-God-she-is-a-pretty-black-woman-who-has-no-sign-of-real-blackness-thus-is-universally-accepted-black. Pretty black. You know, not an “offensive” black. Not as black as a black butt but as white as the palm.

Meghan is not black. She is mixed race. There is a lot of white in her. So why aren’t white people rejoicing over her whiteness?

Because white people have accepted superiority.

Blacks, however, rejoice every time something black happens in Hollywood or at any privileged position. Why? Because black believe deep within that they are inferior. It is the only way to describe a people who would choose to go through Libya, through the desert to face murderers and extortionists, and even rapists just to get to the other side of the world that is predominantly white.

These are deep scars of insecurity, inferiority and servitude. This indifference of developing our own continent is what makes us unequal, in many ways, to whites. Even the best of us, sometimes feel this way. It’s like a child told he isn’t much of anything for a very long time, when he grows up and becomes a billionaire, his self-doubt never truly leaves – money doesn’t wipe this stuff away.

I saw an all-black cast of Black Panther, and blacks celebrating like they just got Independence in 2017. These are signs of the war within us. These are evidence of our inferior state; else why do we even have to wait to be accepted? Why don’t we just go ahead and build our own acceptance?

You’ll find a black artiste who just won a BET award, screaming out her angry veins because MTV didn’t have as many blacks in an award ceremony. Isn’t BET enough? Do whites scream over the fact that BET exists and meets only the needs of blacks? And if BET, for instance, is poorly managed, doesnt that show a problem with blacks? Is this the curse of minorities, to feel both devalued and entitled in the same breath?

It’s as confusing as being a woman, and why I get bored with my gender and race.

How about we just stop rejoicing over the fact that Meghan has some black in her, since whites don’t go around celebrating half the white she has?

How about just being happy for their love story and not their race?