And Bill Gates pays A BIG tithe! By Emeka Oparah 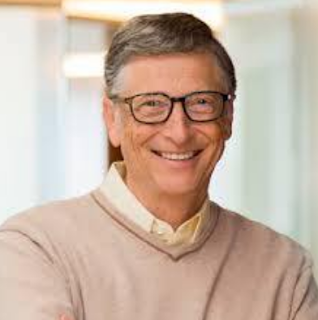 Before I start, I pray almighty God continues to bless and keep Bill Gates, his wife, Melinda, and their kids-and also continue to bless his business, Microsoft, as well as the Bill and Melinda Gates Foundation. I pray this prayer in appreciation of all they’ve done to help mankind through their humanitarian efforts and giant strides in the advancement of Information Technology.
That said, now let me specifically commend Mr. Gates for donating 50 million of his own dollars to the search for the cure of Alzheimer’s, which has killed more people in the United States than Heart Disease and Prostrate Cancer combined. Gates says he has lost seven family members to the degenerative Disease and was joining forces with the Dementia Institute to fight the disease and find a cure. Oh what a worthy cause!
Merely looking at his appearance, one can easily see that Bill Gates, regardless of his “stinking wealth”, lives modestly. Over the years, he’s spent more time in charity work than he’s done in his business. Even Warren Buffet, another wickedly rich but ascetic American willed most of his wealth to the Bill and Melinda Foundation on the grounds that they knew how best to manage “GIVING”. Now that’s very tithe!
In Africa, especially Nigeria, people who are nowhere near Bill Gates’ ranking in wealth would own property in every civilized destination in the world, own several private jets, own malls and high rise buildings and do very little or absolutely nothing for the less privileged. They swim in opulence and obscene wastefulness while people around them, including their relatives and those who work for them, wallow in abject penury.
Bill Gates’ contribution to the research in Alzheimer’s could even be said to be selfish because he said his family appears susceptible to the disease having lost 7 members. That’s smart. He would not only be helping himself but other members of his family to avoid falling victim to the same thing that killed their family members.
In Nigeria, do we ever bother to know what killed our relatives much less invest in the cure? We consign it to that unintelligent “will of God!” In most towns, autopsy is still frowned at due to traditional beliefs-and even the educated are part and parcel of the idiotic beliefs! So, people keep dying of same disease that killed their folks.
May God bless Bill Gates and bless his good intentions. That’s the kind of tithe and tithing that makes sense to me. Any other type swings between ignorance and fraud!
Share on Facebook Share on Twitter Share on Google Plus