TRUMP'S TRUMPET AT THE UNITED NATIONS! BY OPE BANWO 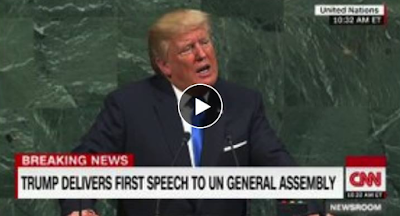 Say what you will about Donald Trump and his Presidency, he is a man that CALLS it exactly like it is. Hate him or love him, one thing you cant accuse him of is equivocation.

While I don't endorse everything he has done to date, but THAT was a PRESIDENT who just spoke at the UNO. Frankly, on this speech I AM PROUD of him. Of course, we continue to argue and fight about individual policies. To be clear, being proud of him today does not mean i whole-heartedly endorse ALL his policies. On those i take each on its own merit ,and take my own position regardless of race, party or ideology

But today, The Trump Man was Clear, Very Direct, NO diplomatic double-speak. Evil is Evil and Every Nation must care for its own people first before carrying the rest of the world . He said it exactly like he meant it and political correctness be damned. He called out those he needed to call out by NAME. You KNOW who he was referring to and don't need to guess.