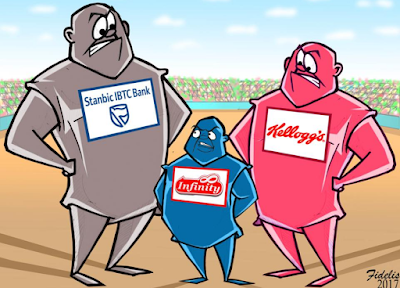 Infinity Snacks is an indigenous manufacturer of breakfast cereals and snacks located in Ijebu-Ode Ogun State with another factory in Kano. The company produces affordable breakfast Cereals locally which is competing favorably with imported brands.

In 2015, Infinity Snacks applied for an expansion loan from Bank of Industry in response to the Buhari Administration policy to increase local production and save the Naira.

BOI approved the loan so Infinity Snacks requested for a Bank Guarantee from Stanbic Bank where it enjoyed various facilities. Curiously, it took Stanbic IBTC a few months to issue the Bank Guarantee.

Eventually, BOI released a sum of N864m to Stanbic IBTC for Infinity Snacks but the bank failed to inform the company for almost two weeks. By this time, the exchange rate spiked so much, Infinity would need an additional N1.2bn to conclude its expansion plans.

Notwithstanding, Infinity claimed it instructed Stanbic IBTC to bid for Foreign Exchange from CBN to purchase equipment for its expansion. For months, Stanbic IBTC claimed there was no liquidity in the market though the bank was bidding for its other customers during the same period.

Frustrated, Infinity Snacks met again with the Bank’s Officers and it was decided that the company will approach BOI for how to make progress. However, it claimed the bank unilaterally decided to return the loan to BOI without its consent on the same day, only informing its customer after the fact!

Now the twist! Infinity Snacks claim that Stanbic IBTC turned round to apply for THE SAME facility from BOI on behalf of its competitor, Multipro Enterprises Limited, the franchisee of the global cereal brand, KELLOGG’S!.

When communication broke down between the two parties, Infinity decided to seek legal action, the filed papers being the source of this write up.

Due to its inability to conclude its expansion as planned, Infinity’s business is under pressure especially because Stanbic IBTC has listed the company as a chronic debtor with credit rating agencies so no other bank can help it access the facility with BOI.

The implications? Possible closure of the Kano Factory, downsizing or eventual closure of the Ijebu Ode factory; many jobs lost; economy of its sub urban locations impacted; consumers with one less choice of Breakfast cereals and global brands incursion into the Nigerian market at the expense of local Brands thus encouraging monopoly.

While we await the court process, this Story is a classical example of the fallout of an unregulated Business environment. While it will be necessary to hear Stanbic’s side of the story, one wonders ....

1. Is the National Assembly aware of such conflicts of interest which seems rampant in the business environment and is a direct consequence of it lethargy in concluding the passage of the Competition Bill?

2. What is the role of banks in the business process? Should a bank represent two competing brands? How can such a bank insulate itself from such conflict of interest?

3. Credit Bureaus are necessary in the system to guard against chronic debtors. However, can a going concern be considered as a bad debtor when it is still in business and servicing its obligations? How many businesses have been killed because they were in dispute with their banks thus considered debtors based on the disputed funds?

4. What institution in the system can resolve this kind of impasse in order to preserve entrepreneurial concerns like this when issues like this happen? How serious is govt you n the policy of local manufacturing when the financial system can be this hostile to MSMEs?