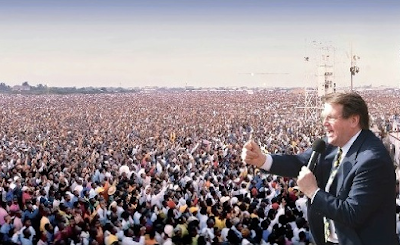 I remember when I was a little girl, I recall his first revival and all the noise around it. The millions that attended, the ones stomped to death by the crowd. The miracles we heard about. The people who claimed he came to heal the land.

I remember all of that today, as I drive past billboards of the man and the hundreds of thousands of hands up in the air as a befitting backdrop.

And immediately, I say a prayer for my parents and the brother who raised me - that none of them was religious, in the least.
Whew!

My brother used to take me to music concerts where we couldn't even afford a drink. We would go watch Felix Liberty and Alex O perform. In those days, Nigerians were hard to impress. They would show up and just stare at the musicians on stage like a bad painting.

I am glad that is my childhood and not in a church.

The Reinhard Bonnke revivals were not our cup of tea. I didn't even know it was possible to stay all night praying to a God. We didn't have those morning prayers. Mum prayed in her room quietly, and the rest of us listened to music or watched Mind Bending.

Almost two decades later I remember that Bonnke crusade. How my mum was excited about it, yet didn't care to attend. She would share the stories she heard in her shop from customers and her apprentices - how the evangelist healed the sick. She shared it like a Nollywood movie, like cheap and thrilling gossip without the necessary passion to validate it. Something that shouldn't be taken seriously. Mum chose yellow eba and afang soup over a lot of things. And I am grafetul for that.

It could have been bad - you could have had a mother who dragged you to night vigils and crusades, praying to the same God who blesses those whispering only "the grace".

But you were saved from religion or believing midnight worship favours you specially in the sight of God. Such holy delusions.

You could have had a father who left the doors open for every paedophile disguised as prayer warriors.

But you were blessed with a father who smoked his cigar, blasting Fela's music.