Home / international / What Is Happening In Myanmar With The Rohingya Muslims! By Kayode Olagesin

What Is Happening In Myanmar With The Rohingya Muslims! By Kayode Olagesin 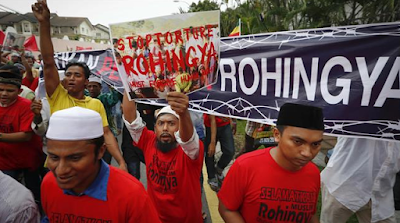 Away from Nigeria to the international scene to what is happening in Myanmar with the Rohingya Moslems feeing across the border to Bangladesh under threat for their lives from the military.

The international community is already seeing this as a case of ethnic cleansing but the Myanmar government says the Moslem controlled media is the one pushing out this false information and demanded for evidence of abuse against the Rohingyas.

CNN states that there is obviously a CONFLICT OF NARRATIVES (Sounds Familiar) but only one TRUTH in this unfolding humanitarian catastrophe.

CNN went and found evidence from among the victims and from the Bangladeshi border guards who say, 'anytime we see smoke across the border in Myanmar, we know we will soon see boats of people fleeing towards Bangladesh but many never make it as the boats capsize due to overloading' (paraphrased).

According to CNN the Rohingha Moslems are part of the 10% stateless people in the world and the current conflict is as a result of years of marginalization. This is happening now somewhere in the world, it won't be the first but will the world ever learn? All over the world, there is an abundance of Religion but little conscience. Might is Right. But is it? Hopefully, we will learn from history including the ones happening before our very eyes
Share on Facebook Share on Twitter Share on Google Plus