Former Australian Prime-Minister, Julia Gillard said the following: "our culture has been developed over two centuries of struggles, trials and victories by millions of men and women who have sought freedom." 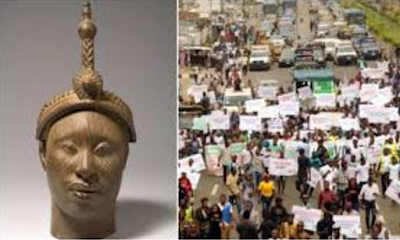 "We speak mainly ENGLISH, not Spanish, Lebanese, Arabic, Chinese, Japanese, Russian, or any other language. Therefore, if you wish to become part of our society, learn the language!"

Let's ignore the historical reality of Australia for a minute, and focus on three keywords in the Honorable Gillard's statements above, namely: CULTURE, LANGUAGE, and SOCIETY/LAND.

It's obvious from the statements above that Honorable Gillard fully understands what I call "sovereign triangulation," and she wasn't even trying to be politically correct about it. Sovereign triangulation is the idea that culture, language and society are intrinsically linked, and the three components must be present for sovereignty to be established.

For example, the dominant cultures in NGR are: Yoruba, Hausa and Igbo, but the dominant language is English; clearly, there is a mix match between the indigenous culture(s) of the people and the language they've adopted to process their cultural realities - you cannot be sovereign in your own land or society when you use a foreign language to process your socio-cultural reality.

In conclusion, Yoruba people have no sovereignty inside NGR because the official language of NGR does not match the socio-cultural reality of Yoruba people, and as long as Yoruba people remain under the parasitic unitary system of NGR, sovereignty will continue to elude them.