Home / local / Somebody Said Corruption Has Been Dealt With By The Buhari Government! By Ken Tadaferua

Somebody Said Corruption Has Been Dealt With By The Buhari Government! By Ken Tadaferua

Somebody said corruption has been dealt with by the Buhari Government. 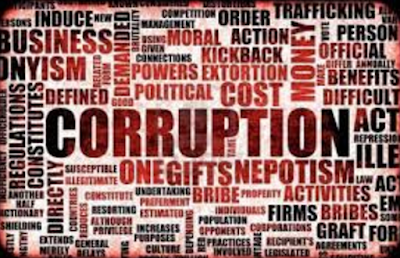 Really? For affidavit which official fee is N200, Nigerians pay thousands of Naira, the same for certified true copy of court judgements, the same for vehicle license, driver license, road worthiness etc. To get official government documents you must make illegal payments. All of these run into billions and billions of Naira across the country on a daily basis.

Have you ever been attacked by armed robbers and you rush to report it at a police station? Well you pay for fuel, for paper to write statement and have to roger the officers to do the job for which they are paid. Is it customs? Is it Immigration to obtain passport? Is it the private sector where you must roger to get contracts? Is it NNPC?

Ok, some high profile arrests and reports of stolen billions have been made. Now corruption is dead? But that has been routine, arresting some big rogues, over the decades. Every head of state does it, makes a helluva propaganda about its anti corruption efforts. But each leaves, intact, the system that makes corruption easy. The free sharing of national revenues from the cesspool of corruption called federation account and more recently billions in bail out funds and Paris Club refunds to rogues in government and it is legal. The living above one's means and it is legal. The open display of opulence, the use of police and soldiers to guard rogues, the absolute disregard of values are all legal.

Most Nigerians live, feed, pay school fees, build houses and buy cars with money from corruption. Without it, this country would be in turmoil. The chain of stealing is interminable. Take this story: A school headmaster dreams up a dubious scheme to make money by asking all the 2000 school pupils to take passport photographs for their files. He calls a photographer who charges N50 per child. The headmaster calls the teacher to ask the pupils to pay N100 each. The teacher tells the pupils N150. The pupil tells the mother N200 and the mother tells the father N250 per passport photograph.

The father then goes to the public office where he works to charge documents seekers illegal fees. That's how we roll in Nigeria. Break that chain and it will all collapse like a pack of cards. It just goes round and round.

Each of the folks in this sick chain love to shout anti corruption slogans. They also hate to go on strike because they fear to lose sleaze money.