President Buhari is recuperating. While it is obvious from the video that he is physically weak, one can see he is spiritually active. 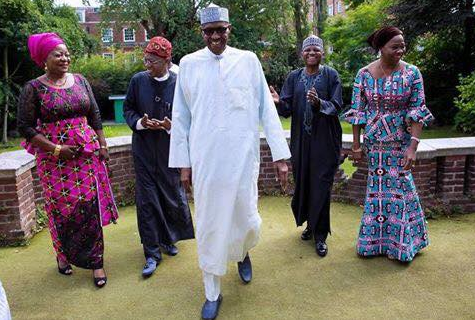 There was limited animation in a man once with so much presence and awe. On a personal and humanistic level, it felt sad for me. Mohammadu Buhari achieved greatness by a resilience that brought him to power. But that greatness now seems to have merely brought him to the threshold of history and abandoned him there.

The protest calling for his resumption or resignation should be tolerated in its democratic right. But I think that protest should stop—as a gesture for nationalism and political expediency. Electioneering is less than one year away and we can use that to address the matter. I wish President Buhari quick recovery.

My sympathy for the President is not blind to the shame that is the entire situation and its handling. He owns Africa's largest photography album on foreign medication—but that's not the major point. The issue is how this shame has been normalized as entertainment, a game of thrones released in seasons with monotonous episodes.

In this photo, Garba Shehu is amused, clapping for a cat-walking Buhari, as if excited watching a toddler take its first steps in life. He is happy for his principal and that is fine. But the scene is not Nigeria, and the miracle worker is the white man, while our own part as a people is to pray.

The cast of this absurdity is not ashamed that a nation nearly 60 years old cannot take care of its medical needs. India is producing most of our malaria drugs as we speak. A recent report reveals a worsening state of brain-drain among our medical personnel.

Our herbal care sector is being highjacked by Chinese and megaphone-wielding charlatans. So at what point in our national life shall we really stop this shame of foreign Medicare? Just how do these images not embarrass any Nigerian with the smallest sense of dignity? Both the BBC and CNN have mocked the charade. How did we get to normalize ignominy?
Share on Facebook Share on Twitter Share on Google Plus