Home / local / What I Found Captivating And Revealing About Buhari Returns! By Kayode Olagesin

What I Found Captivating And Revealing About Buhari Returns! By Kayode Olagesin 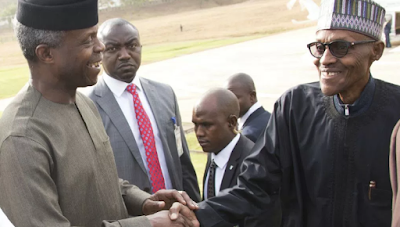 Of the many pictures released following the return of PMB to Nigeria, I found two especially captivating and revealing. One is of him tightly gripping the hand of Professor Osibajo and the other, seated with his children and grandchildren. Both pictures humanise the office of President which more and more appears to be seen as a 'thing' and not a person. That is why some people can abuse or curse a President or wish him dead. Those who are scandalized by such now, forget so soon that just a few years back they were as vile as those they now vilify. Some people cannot separate criticism from abuse, the policies and actions and inactions of a President are fair game for criticism, some fair and some unfair. It comes with the territory and those who cannot stand the heat should leave the kitchen. But there is a point at which one must draw the line and at no time should criticism stray into abuse.

Our Presidents, both Immediate Past and Present, have both been victims of Hate Speeches from citizens they serve. Those who do so think they are dealing with an inanimate object, the Presidency, but they forget it is actually flesh and blood, of someone with their own fears and aspirations, who rely on others for support, who appreciate loyalty, with family and friends they love and who loves them. We must always bear this in mind when the temptation to abuse and curse becomes overwhelming, and pause for a moment to reflect - that this is someone's father and grandfather you are about to abuse.

Nigeria did not arrive here suddenly, there are many with their ungracious words that led us here. That Nigeria is divided more than ever is evident around us and growing, fueled by the intemperate words of those who lack the virtue of being gracious in victory and those who fail to understand that failure today can be victory tomorrow if the right lessons are applied. Opposition is part of the democratic process, it is a fundamental part but there is a way to play it constructively and there is a way to play it negatively. Too often, what we see displayed in Nigeria is more of the latter.

The President is back and we rejoice with him and his family first of all and with all Nigerians because we certainly don't need a heated polity. His coming home better is good for the country. He should be given a few days to rest and after that, reminded too that Nigerians are not statistics, they are simple folks with friends and families of their own who want the basic necessities of life and look to their President to deliver that which he promised on the soapbox. It is not too much to ask.